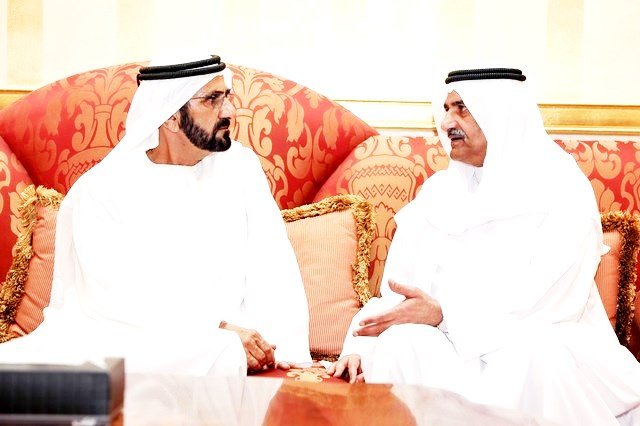 Funeral prayers held at Sheikh Zayed Grand Masjid in Fujairah to pay tribute to Sheikh Hamad. Three days of mourning were declared by the President, Sheikh Khalifa, and flags flew at half-mast.

Sheikh Khalifa mourned the Sheikh Hamad’s death and prayed that Allah would rest his soul in eternal peace.

“Sheikh Hamad is well known,” said Mr Aziz, who runs a tyre shop. “He has overseen a lot of the projects that developed this emirate.”

“He is well known to us, especially for those who have been living here for a long time. Attending the funeral is the least we can do for this great man.”

“He used to talk to a lot of the workers at the department and make sure that if we faced any problems, he would do what he could to help us,” he said.

Ghasan Balkis, who had known Sheikh Hamad bin Saif since late 1970s, said: “In the beginning it was a working relationship, but he used to come daily to the showroom after asr [afternoon] prayers and we used to pray maghrib [sunset] together.

“He was like my father. He was helpful and solved many of the emirate’s problems. He had a lot of good in him.”

Balkis met Sheikh Hamad bin Saif who arrived in Fujairah and joined as Managing Director of Ahmed Zayani and Sons car showroom says ‘ I was talking to his son on WhatsApp at 10.29 PM yesterday and then I received the news of his death at midnight,” he said.

Emirati Majid Abdullah, 32 said Sheikh Hamad was a humble and kind man. “He is known in the emirate as a man of good deeds and kind, always helping others in need,” Majid Abdullah said. It was a shocking news for his father and himself.

“We heard early in the morning the news of his death,” said Mr Abdullah, a government employee. “I came with a few of my co-workers to pray for his soul, may he rest in peace.”

Everyone in the emirate was sad to have lost a loved and admired person, said Emirati Abdulrahman Al Kaabi, 47.

“He is loved by both Emiratis and residents of the emirate – you can see that by the amount of people who left their jobs and closed their businesses to attend the funeral prayers and burial.”