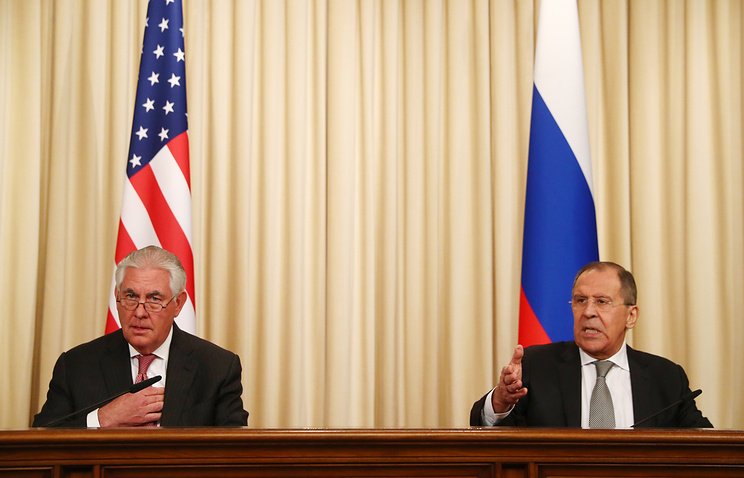 Talks with US Secretary of State Rex Tillerson turned out to be frank and extensive, Russian Foreign Minister Sergey Lavrov said following their meeting.

“We held talks with US Secretary of State Rex Tillerson, we have just had a long, two-hour meeting with Russian President Vladimir Putin,” he said. “The talks turned out to be frank and extensive, we covered the entire range of key issues concerning our bilateral relations and cooperation on the global level,” the Russian top diplomat added.

“We have agreed that the current stage in our relations regarding the global agenda is not calm, to say the least,” Lavrov said.

“We have numerous problems, including those, which were left as action-delayed mines from the previous US administration, which was the (ex-President Barack) Obama administration,” Lavrov said.

“We are being realistic and realize that in order to overcome such obstacles we will need to imply weighty efforts on condition that our US colleagues will meet them,” Lavrov said adding that it was a fact, reiterated by Russian President Putin on Wednesday.

“I am confident that the long hours Rex Tillerson and I spent today eye to eye with each other and together with the Russian president, were not in vain,” Lavrov said. “We now understand each other better. I hope that these contacts will continue, involving not only us but also our personnel and personnel of other Russian and US state bodies,” Lavrov added.

“As for my impression from the talks, taking into account all the current issues, both objective and artificial, the possibilities for cooperation remain open,” Lavrov said. “Russia is ready for that, ready for dialogue with the US in various spheres, and not only for dialogue but also for joint activities in both countries’ interest. Of course, we expect the United States to respond in kind.”

Attempts to prevent Moscow and Washington from cooperating and raise tensions are short-sighted, Lavrov said.

“We see attempts being made to prevent us from cooperating and even raise tensions,” he noted.

“We believe that this approach is short-sighted, particularly because history has shown that when Moscow and Washington cooperate, not only our peoples but the whole world benefits from it,” the Russian top diplomat added.

Russia and the United States should maintain communications both at a diplomatic and military level, Tillerson said.

“We agree there needs to be more senior level of communication between our two countries both at a diplomatic and military level,” Tillerson said.

“We agreed to establish a working group to address smaller issues and make progress towards stabilizing the relationship so that we can then address more serious problems,” Tillerson said.

Moscow and Washington have decided to appoint special representatives of the Russian Foreign Ministry and the US Department of State to assess the current bilateral issues, Lavrov said.

“We have agreed to appoint special representatives of the Russian Foreign Ministry and the US Department of State who would in an unemotional manner thoroughly assess the differences in our bilateral relations that emerged in the past years, particularly during Barack Obama’s presidency,” the Russian top diplomat said.

War on terror in Russia-US focus

Russia and the United States confirm that both nations are focused on an uncompromising war on terror.
“That is a theme that our president discussed during their several phone conversations, including the phone talk overnight to April 4, when Donald Trump called Vladimir Putin to offer his condolences over a terrorist attack in St. Petersburg’s metro system,” Lavrov said

Russia and the United States expect to resume talks on disarmament, Lavrov said.

“We have pointed to the fact that both Russia and the United States are concerned over the situation concerning political and military security on the regional and global level,” he said.

“We have synchronized our watches concerning the implementation of bilateral agreements on strategic stability and arms reduction. We agreed to overcome the gap in these processes which emerged due to the change of the White House team. We expect that our contacts on strategic stability and arms reduction will be resumed and will be held in a business-like manner so that we could implement all our decisions,” the Russian top diplomat added.

Memorandum on flight safety over Syria

“The Memorandum on preventing incidents and ensuring flights safety during operations in Syria (earlier signed with the United States) was suspended unilateraly by Russia,” he said.

“Today, the Russian president expressed our readiness to return to its (memorandum’s) implementation under the condition that there would be a clear-cut confirmation of the initial purpose of the US-led Air Force Coalition and the Russian Aerospace Forces in the fight against the Islamic State and Jabhat al-Nusra (both organizations outlawed in Russia),” Lavrov said.