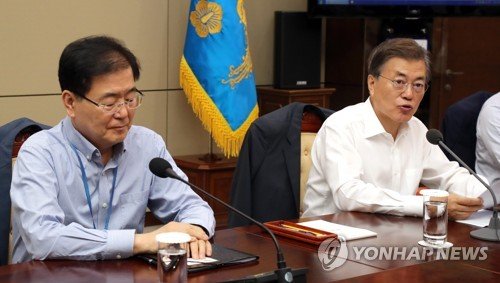 “The standing committee of the NSC noted the security condition surrounding the Korean Peninsula was becoming serious due to North Korea’s repeated provocations and threats,” Park Soo-hyun, a spokesman for the presidential office Cheong Wa Dae, told reporters.

“The NSC called on the North to immediately stop all activities that will further escalate tension on the Korean Peninsula.”

In a statement carried by the North’s Korean Central News Agency, the commander of the strategic force of the North Korean military said the country plans to launch four intermediate- or long-range ballistic missiles that will cross over Japan and hit waters 30 or 40 kilometers from the U.S.-controlled island of Guam, home to several U.S. military units.

The latest North Korean threat sparked serious concerns here as it followed a clear and possibly the strongest warning yet from U.S. President Donald Trump, who said the North will be met by “fire and fury” that the world has never seen before should the communist state continue to make threats against his country.

Thursday’s NSC meeting marked a regular session of its standing committee, but the Cheong Wa Dae spokesman noted the latest meeting required long, in-depth discussions due to the seriousness of the current condition surrounding the Korean Peninsula.

Also, the meeting involved all top security-related government officials, including both defense and foreign ministers, as well as the head of the National Intelligence Service.

A Cheong Wa Dae official earlier noted the ministers and the spy agency chief had often sent their deputies in their place to standing committee meetings in the past.

“Noting that military tension or an armed conflict on the Korean Peninsula will not benefit any country, the NSC standing committee decided to take all necessary steps to ease tension and maintain peace under close cooperation with the United States and other key nations based on the strong joint defense readiness of South Korean and U.S. joint forces,” Park told a press briefing.

The Cheong Wa Dae spokesman refused to elaborate on the steps to be taken, citing the sensitivity of such information, but said they “literally meant every possible measure we can take.”    Also, they apparently included resuming dialogue with the reclusive North.

Seoul earlier proposed holding military and Red Cross talks with Pyongyang, to which the North continues to remain completely silent.

South Korea has said the bilateral talks will strictly discuss bilateral and humanitarian issues, such as easing the military tension between the divided Koreas along their demarcation line and holding reunions of families here separated since the end of the 1950-53 Korean War.

Still, many believe the talks, if held, may signal the communist state’s return to multilateral talks aimed at its denuclearization.

South Korea and the North technically remain at war as the Korean War ended only with an armistice, not a peace treaty.