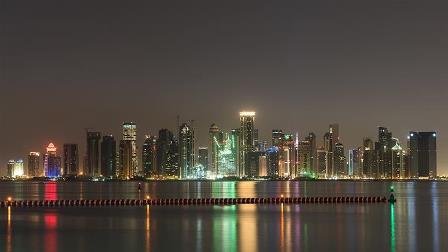 A Saudi lobby in the United States has launched a television advertisement campaign against Qatar, contracts reviewed by Al Jazeera show, with $138,000 spent on seven, 30-second TV spots.

The TV spots have been purchased by the Saudi American Public Relation Affairs Committee (SAPRAC).

The advertisements, which began airing on NBC-4 in Washington, DC on July 23, say Qatar is supporting “terrorism” and destabilising US allies in the region, allegations that the Saudi-led group of countries has maintained since cutting ties with Qatar on June 5.

Doha rejects the allegations as “baseless”.

Four of the ads will run during Meet the Press, a weekly news-interview programme that sees host Chuck Todd interview high-level politicians on Sunday mornings.

The programme leads the Sunday show news market and has seen gains in viewership over the past year, according to reports.

The three other ads were aired during the British Open golf tournament on July 23 and cost $6,000 each.

Kip Cassino, executive vice president of research of a market research firm Borrell Associates, said SAPRAC probably does not want to influence the public, but decision-makers, given the few spots purchased for the ad.

“Having a few ads is not much repetition. There’s not much to gain from it,” Cassino told Al Jazeera, adding that current research suggests that repetition is key to influencing an audience.

Richard Lau, a professor of political science at Rutgers University who specialises in media effects in political campaigns and political persuasion, agreed.

OPINION: What is the Qatar-GCC showdown really about?

The few airings, time slots and the fact that the advertisement is only airing in DC means there is a select audience: politicians.

The ad “would only be in the service of influencing government policy towards the countries. It’s not like a campaign where people are going to go out and vote for Saudi Arabia or Qatar”, Lau said.

US Secretary of State Rex Tillerson visited the Gulf earlier this month and called for direct talks between Qatar and the Saudi-led group, which includes Bahrain, Egypt and the United Arab Emirates.

Lau doubted the effectiveness of the TV spot, saying that experts and politicians in Washington, DC, are some of the most informed individuals regarding foreign policy, and many have already made up their minds on the issue of who funds “extremist” organisations in the Middle East.

“What strikes me as interesting is that Saudi Arabia is starting a new strategy for influencing opinion in America,” he said.

The strategy is headed by the new pro-Saudi lobby organisation in Washington, DC.

SAPRAC was founded in March 2016, according to filings from the US’ lobbying disclosure database.

Salman al-Ansari, a Saudi writer, lobbyist and political commentator who has become a fixture on US national news networks, is SAPRAC’s founder and president.

Al-Ansari stirred controversy last October when he wrote in favour of strong ties between Israel and Saudi Arabia.

SAPRAC paid for the ads, and the screen time was purchased by the ad firm Canal Partners Media.

OPINION: Will the GCC crisis be resolved soon?

The ad firm, which is typically employed by Democratic candidates and received more than $9m in payments for the 2016 election cycle, made a commission of more than $20,000 on the SAPRAC deal.

Canal Partners Media did not respond to Al Jazeera’s request for comment on its relationship with SAPRAC.

For Riza Marashi, Research Director at the DC-based National Iranian American Council, SAPRAC is one of the most obvious instances of warmer Israeli-Saudi relations.

Israel has a long history of influencing US politics through its lobbying group, the American Israel Public Affairs Committee (AIPAC).

Marashi said he has noticed “a willingness” from pro-Israel lobbyists and groups to teach SAPRAC how to lobby, “particularly since King Salman and Mohammed bin Salman came into the most powerful positions”.

Marashi noted that Saudi Arabia had a powerful lobbying apparatus in Washington for years, but it was mostly done through the embassy through a behind-the-scenes strategy.

The lobbying disclosure database shows that SAPRAC has kept a low profile since March 2016. Of the organisation’s six quarterly reports, only one shows any actual lobbying: a 2016 meeting with Joseph Westphal, the former US ambassador to Saudi Arabia.

Now, there is a “thrust to create a greater presence in DC”, and these TV ads are another example, Marashi said.

If its efforts are successful, Saudi Arabia will wield even greater influence in Washington, and “this is extremely dangerous”, Marashi said.

“The Trump administration has given the Saudis, Emiratis and Israelis a blank cheque to do whatever they want in the region. You saw this after the president visited Saudi Arabia, who then began the Qatar blockade.”

Marashi listed human rights concerns in Yemen, where Saudi and UAE forces are accused of inflicting widespread civilian casualties and continuing a blockade of vital ports, leaving people with limited access to food and medicine amid one of the worst cholera outbreaks in years.

Israel, for its part, is increasing pressure on Iran with the help of Saudi Arabia and the US.

US President Donald Trump has repeatedly criticised Iran and imposed new sanctions on the country despite its adherence to a landmark nuclear deal.

Marashi said that this belligerence is not in the US’ interests.

“If you’re Kuwait or Oman, and you see the US ally Qatar being blockaded without response from Washington, does that inspire confidence? If you’re Iran, you say ‘thank God we have our missiles, what would stop them from doing this to us?'”