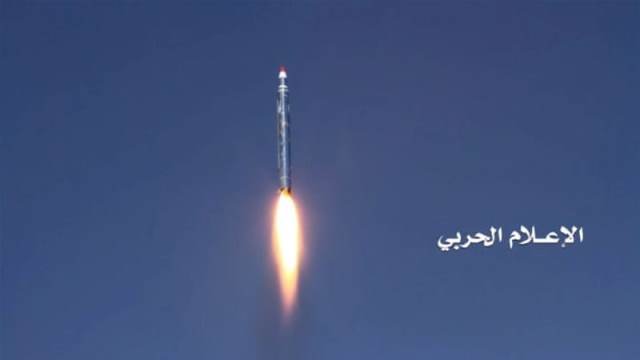 A Saudi-led coalition battling Yemen’s Houthi rebel says it has intercepted a missile fired from the neighbouring country towards the kingdom’s capital, Riyadh.

Houthi rebels said on Tuesday they had launched a ballistic missile targeting al-Yamama royal palace to mark 1,000 days since the coalition started its bombing campaign in Yemen.

“This is our answer to them and to the whole world,” Abdulmalik al-Houthi, the rebels’ leader, said in a televised address.

“The more crimes you perpetrate, the more tyrannical you are, you will meet nothing but more missiles.”

The Saudi-led coalition said that the missile was directed at residential areas and that there were no casualties, according to SPA, the Saudi state-run news agency.

“Coalition forces confirm intercepting an Iranian-Houthi missile targeting south of Riyadh. There are no reported casualties at this time,” the Saudi Center for International Communication said in a Twitter post.

However, Mohammed al-Bukhaiti, a spokesman for the Houthis, told Al Jazeera that there were “several casualties” in the attack.

“The Saudis will claim they shot down our missile, but we have precision technology, capable of striking any target in the kingdom,” said al-Bukhaiti.

He added that they fired a Burkan 2-H missile – a Scud-type missile with a range of more than 800km – from Yemen’s Saada region towards Riyadh.

Saudi Arabia and its allies have been at war in Yemen since March 2015, when the oil-rich kingdom intervened to push back the Houthis – who control the Yemeni capital, Sanaa – and reinstate the government of President Abd-Rabbu Mansour Hadi.

“I think the Houthis wanted to make a statement that they are still up and running and that they are still fighting, despite the fact that in recent days and weeks there have been allegations that the Houthis have been weakened by the split with [late ex-Yemeni President] Ali Abdullah Saleh and that they possibly would not be able to shoot missiles further into Saudi territory – but they proved otherwise,” Andreas Krieg, a defence analyst, told Al Jazeera.

It was the third time since November that a missile had been launched from Yemen towards Saudi Arabia.

On November 4, a missile was launched towards an area near Riyadh’s King Khalid International Airport, prompting Saudi to accuse Iran – who it blamed for the launch – of committing an “act of war”.

Another missile likely targeted the city of Khamis before it was intercepted on December 1.

US Security firm Stratfor has reported that Houthi-owned missiles are “most likely modifications of missiles previously in the Yemeni arsenal”.

“In pictures, the missiles appear to be similar in shape and dimensions of Scud missiles. Yemeni forces are likely modifying Scud missiles in the same way North Korea, Iran and Iraq did before them,” it said in a report earlier this year.

Yemen amassed a large stockpile of Scud missiles when North Yemen and South Yemen reunified in 1990.

In the years that followed, Yemen also acquired similar weaponry from North Korea, purchasing Hwasong-6 missiles, which have a range of up to 550km.

In an interview with Al Jazeera in November, Mohammed Abdul Salam, a Houthi spokesman, threatened that the rebels would escalate operations on the Yemeni-Saudi border and attack targets deep inside the kingdom.

“The Saudis started the war. Our response will continue and increase, whether it’s targeting deep inside Saudi Arabia, targeting military positions where Saudi jets fly from, or military bases inside Yemeni territory,” Abdul Salam said.

Dozens of smaller missiles have been fired from Yemen into Saudi Arabia throughout more than two years of war in Yemen, while Saudi Arabia, supported by the United States and other countries, has launched thousands of air attacks against Houthi targets.

The Saudi government has accused regional rival Iran of smuggling missiles and technology to the Houthis, an allegation Tehran denies.

The war in Yemen has created what the UN describes as the world’s worst humanitarian crisis, killing at least 10,000 civilians and leading to widespread hunger and disease.

20 January 2022 By Ashraf Siddiqui More than 7,000 books of different ...
END_OF_DOCUMENT_TOKEN_TO_BE_REPLACED