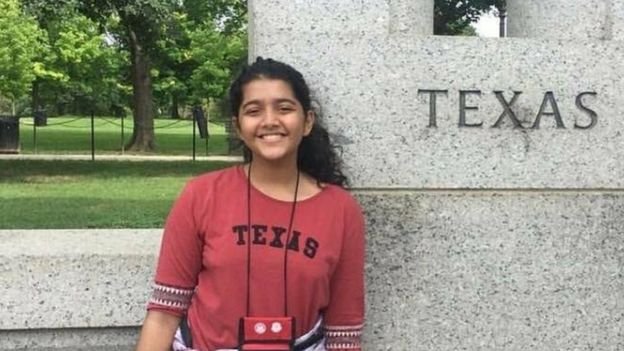 An exchange student from Pakistan is among the first named victims of a Texas high school shooting.

Ten people were killed and 10 were injured at Santa Fe High School when a student opened fire. The suspect is Dimitrios Pagourtzis, 17.

The embassy of Pakistan in Washington DC confirmed that student Sabika Sheikh was among the dead.

Substitute teacher Cynthia Tisdale was also killed in the attack, her family told US media outlets.

Mrs Tisdale’s niece and brother-in-law both confirmed the news. Writing on Facebook, John Tisdale said his sister-in-law was an “amazing person”.

Sabika Sheikh, aged 18, had been on the Kennedy-Lugar Youth Exchange & Study Abroad programme (YES). The programme is run by the US state department, and was set up in the aftermath of the 11 September 2001 attacks to bring students from Muslim-majority nations to the US on a cultural exchange.

Her parents, Abdul Aziz and Farah Sheikh, told the BBC they heard about the shooting through television news.

They said they confirmed their daughter’s death within an hour by speaking to school administrators. Ms Sheikh’s body would be returned to her home in Karachi early next week, they said.

Other victims, believed to be mostly students, are expected to be identified by Texas authorities later on Saturday.

The attacker, Dimitrios Pagourtzis, was arrested and charged with murder. He allegedly used a shotgun and a revolver taken from his father, who legally owned the weapons.

What happened during the attack?

Students said the shooter entered an art class and opened fire shortly before 08:00 (13:00 GMT) on Friday. There were 1,400 students in the school at the time of the attack.

One student, Breanna Quintanilla, told AP that Mr Pagourtzis walked into the room, pointed at someone, and announced: “I’m going to kill you.” Ms Quintanilla was wounded in her leg as she fled.

Officers stationed at the school engaged Mr Pagourtzis. One of them, John Barnes, was injured. He was in a critical condition and undergoing surgery, local media reported.

Police also found information in the suspect’s diary, and on his computer and mobile phone, suggesting that he planned the attack and intended to kill himself afterwards.

Texas Governor Greg Abbott said the teenager “gave himself up” because “he didn’t have the courage to commit the suicide”.

Mr Abbott also said “various kinds of explosive devices” had been found at the school, 40 miles (65km) south of Houston, and off-campus. They included “a CO2 device” and “a Molotov cocktail”, he said.

So far this year, more than 5,000 people have died in shooting incidents in the United States, according to monitoring group the Gun Violence Archive.

Hundreds of people gathered at sunset on Friday on a large open lawn near the school for a vigil.

The sound of preachers and politicians was intermittently drowned out by wailing and sobs from attendees, the BBC’s Paul Blake said.

President Donald Trump, speaking at a prison reform event at the White House, described the attack as “absolutely horrific”.

“My administration is determined to do everything in our power to protect our students, secure our schools, and to keep weapons out of the hands of those who pose a threat to themselves, and to others,” he said.

The White House school safety panel – set up in the aftermath of the mass school shooting in Parkland, Florida, earlier this year- had been “activated” and would meet next week, the White House said.

Governor Abbott called the shooting “one of the most heinous attacks that we’ve ever seen in the history of Texas schools”.

One professional athlete from the state – JJ Watt, of the Houston Texans NFL team – has offered to pay the funeral expenses of the victims.