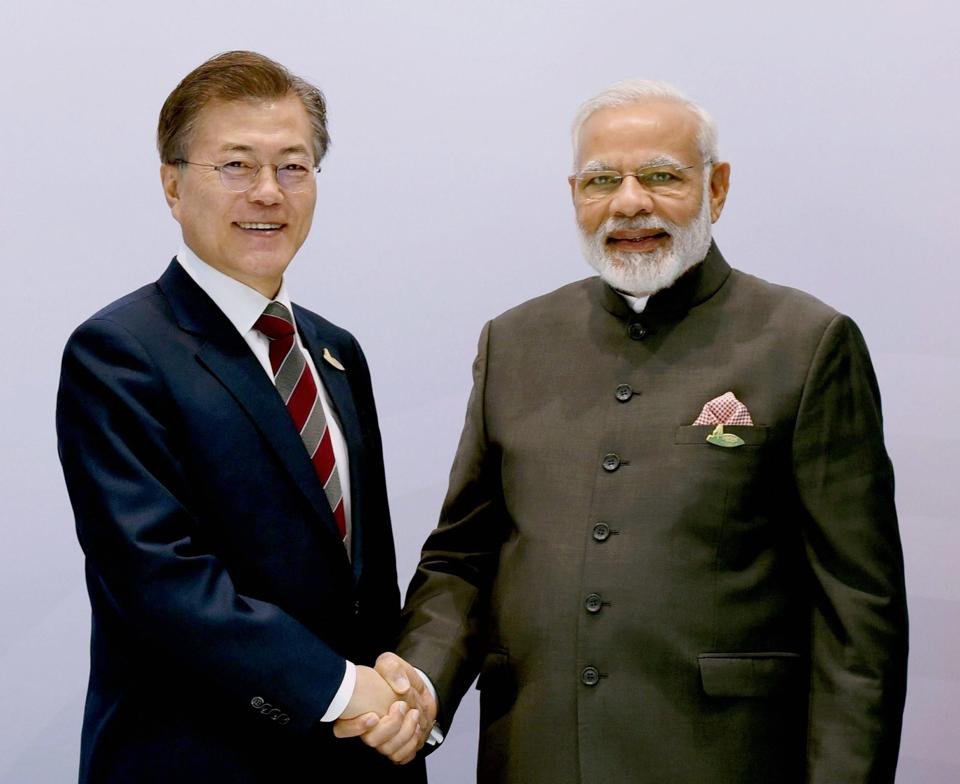 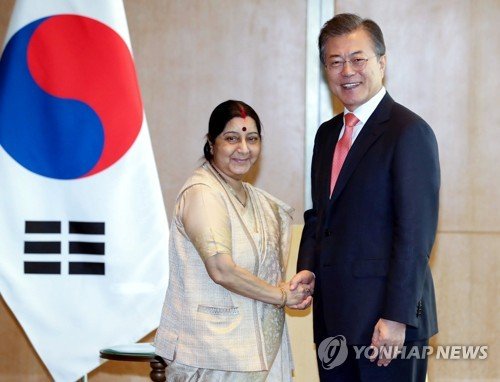 South Korean President Moon Jae-in vowed efforts to greatly improve his country’s relationship with India and expand economic ties between the two countries on Monday, one day before he was set to hold a summit with Indian Prime Minister Narendra Modi.

“I have hopes and plans to upgrade my country’s relationship with India to the level of its relations with the four major powers,” Moon said while meeting with Indian Foreign Minister Sushma Swaraj.

The meeting came one day after the South Korean president arrived here for a four-day state visit, marking his first trip to the South Asian nation since taking office in May last year.

The South Korean president was earlier scheduled to meet with India’s Vice President Muppavarapu Venkaiah Naidu later in the day, but the meeting was called off due to their schedules, Moon’s presidential office Cheong Wa Dae said.

“We expect the trip to be an important opportunity to strengthen friendship and trust between the leaders and to create a basis for the development of our country’s complementary and mutually beneficial cooperation with India and Singapore to establish future-oriented and strategic relations with the countries,” a Cheong Wa Dae official said earlier of Moon’s trip to the South Asian country. The South Korean president is currently on a two-nation trip that will later take him to Singapore.

Moon will attend a joint business forum of Indian and South Korean business leaders later in the day.

He will then make a rare visit to a local factory of Samsung Electronics Co. to mark the recent completion of its construction. He was expected to be accompanied by Indian Prime Minister Modi for a rare joint excursion to the production facility of a private firm, Cheong Wa Dae officials said.

In 2017, Samsung supplied 41.8 percent of all smartphones sold in India, closely trailed by Chinese competitors with a market share of 40.9 percent, Seoul officials said earlier.

Seoul and New Delhi already have a free trade agreement, known as the Comprehensive Economic Partnership Agreement, that went into effect at the start of 2010. They are currently seeking to expand the free trade pact, with five rounds of official negotiations held so far.

The Moon-Modi summit will mark the second of its kind as the leaders first met on the sidelines of the Group of 20 summit in Germany last year. It will be followed by Moon’s meeting with his Indian counterpart, Ram Nath Kovind, and a state dinner to be hosted by the Indian president.

Moon will leave for Singapore on Wednesday.