Reham Khan’s Biography Gets a Surprise Release on Amazon 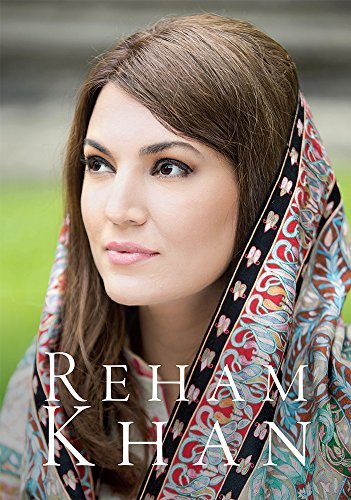 Titled Reham Khan, the 563-page biography is said to detail the main events of her life as she balanced motherhood with a career that veered from broadcasting to social activism. However, the book caused a furore prior to release due to its rumoured portrayal of her ex-husband Imran Khan as well as other notable personalities like former cricketer Wasim Akram and business Zulfiqar Bukhari.

Reham locked horns over the book’s contents with several public figures, most notably TV host/actor Hamza Ali Abbasi who accused her of portraying Imran Khan negatively to further his rival party PML-N’s agenda ahead of the elections.

In an interview with CNN-IBN, she referred to her biography as “an in-depth book about my life and relationships” and explains that “those relationships and their problems… have an impact on the futures of all Pakistanis and people in our region.”

The book’s Amazon page further adds that it “touches on sensitive issues, both political and social, and the author has had to resist extreme bullying, harassment and life-threatening situations to bring it to you.”

The book is available in paperback in the UK and select territories and in ebook format worldwide.

Reham Khan has already racked up some sales, as tweets have started pouring in about its content.

Her interview, which was featured as part of the show Face Off, reveals that her book portrays her former husband, Pakistan Tehreek-i-Insaaf (PTI) chief Imran Khan, as two-faced and turning a blind eye to the sexual harassment and coercion that she says runs rampant in his party.

Reham refers to her biography as “an in-depth book about my life and relationships” and explains that “those relationships and their problems… have an impact on the futures of all Pakistanis and people in our region.”

She elaborates about the book’s contents, “So I’ve discussed morality in terms of nepotism, meritocracy or the lack of it, sexual harassment, sexual coercion and how sexual favours are used for political and media positions, and some of [those incidents] are directly related to PTI.”

While she didn’t name them, Reham insists that there are specific incidents of sexual misbehaviours mentioned in the book.

When asked if Imran Khan was directly involved in those issues, she said, “People at the top have to take responsibility for what happens in their household and in their party.”

When asked again if women have reason to have apprehensions [of being sexually coerced] in relation to Imran Khan, Reham grew vague, “Yes. Why I’ve talked about it is that I feel that if one woman can compromise, another woman who deserves the position will lose their career.”

Reham also touched on what she called Imran’s shifting loyalties which she said was a disturbing trend that voters in the upcoming election needed to be aware of.

“When I voted in 2013 for Imran Khan, I didn’t know what I was voting for,” she says, adding that she won’t be voting for PTI again.

“They haven’t done anything in KP,” she explains. “When you vote for someone who professes to be different, you have higher expectations. The fact is we have seen the same sort of politics or much less strength in addressing some issues.”

She adds, “People have constantly referred to the fact that he’s Mr U-turn. There’s a line in the book where I say [to him when I was his wife], ‘You know I won’t be voting for you in the coming election’ and he just laughs. [I said] I don’t know what he’s about.”

“It’s not only about Imran,” she clarified. “[In my book] I traced what is this frame of mind we’re in when we go in to vote, what is the information [we have] at hand. You expect journalists covering certain issues to know a little better. But I argue whether we really know what we’re voting for.”