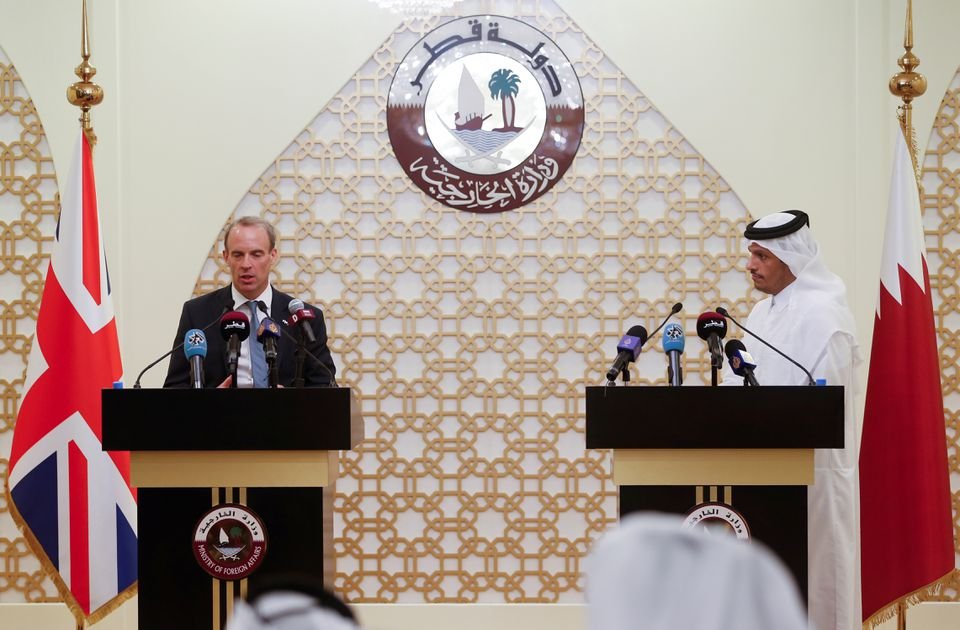 Deputy prime Minister and Minister of Foreign Affairs of State of Qatar, Sheikh Mohammed bin Abdulrahman Al Thani has stressed that Qatar will continue its efforts as an impartial mediator to enhance international agreement over Afghanistan.

“Qatar will continue and coordinate with all friendly countries to ensure the interests of Afghanistan and its people,” Sheikh Mohammed said in a joint press conference with Secretary of State for Foreign, Commonwealth and Development Affairs of the United Kingdom Dominic Raab in Doha on Thursday. the FM said his discussions with the UK Secretary of State focused primarily on Afghanistan. The FM praised the strong strategic relations between Qatar and the United Kingdom, stressing that the meeting with Raab dealt with bilateral relations and the means to enhance them in all fields.

He said the two sides evaluated the security and political developments in Afghan. They also discussed the challenges and how to address them, stressing that the two sides share similar views regarding how to deal with these developments.

The FM noted that he reviewed with the UK Secretary of State the outcomes of the latest meeting with US Secretary of State Antony Blinken in the framework of the meeting of the foreign ministers of the group of 7, and how to build international agreement on Afghanistan.

On restarting operations at Kabul airport and Qatar’s role in that regard, the FM said the evaluation process is still ongoing and that it is early to make a decision regarding that.

He noted that there wasn’t a clear indicator that shows that the airport is ready. He said they are currently in the phase of evaluating whether Qatar’s support will help make a difference in resuming operations at the airport sooner, noting however that there is currently no agreement on how that will take place and that it is being discussed.

He said Qatar is in contact with the Taliban regarding the issues and threats in restarting operations at the airport, adding that he was optimistic they will be able to restart operations as soon as possible. The FM said the subject represents a great indicator if Taliban honoured its commitment to providing a safe passage to those who want to leave Afghanistan, including Afghan citizens, stressing that Qatar is sparing no effort in communicating with the Taliban.

He noted that there was constant communication with the Turkish side to discuss whether they could provide technical help in that regard, expressing his hope that there will be progress made in the coming day.