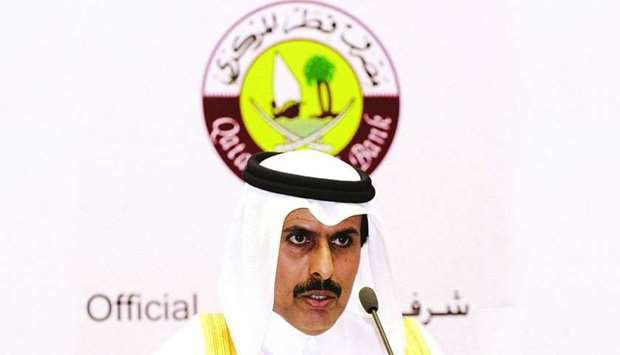 Sheikh Abdullah bin Saud Al-Thani, Governor Qatar Central Bank has reviewed the latest developments in the financial sector in the country, as well as ways and means by which the State of Qatar will be able to attract specialized American financial technology companies to come to Qatar and help banks improve the quality and efficiency of their offerings in this area.

Governor, Qatar Central Bank was addressing at a dinner hosted by Qatar-US Business Council and the American Chamber of Commerce in Washington. Dinner was hosted on the sidelines of annual meeting between World Bank Group and the International Monetary Fund (IMF) held in Washington from October 18 to 20.

Sheikh Abdullah bin Saud Al-Thani highlighted Qatar-US economic relations, increase in bilateral trade between US and Qatar. He stressed on the importance of United States as a strategic partner to the State of Qatar, pointing out that all economic indicators confirm the improvement of economic relations between the two sides. He said that unjust embargo imposed on State of Qatar provided opportunity to reconsider its international trade relations, and  the state has become more open, diverse and more self-reliance.  He said that State of Qatar has become more ambitious, independent, and focusing on globalism, while insisting on strengthening and expanding its relations with important partners.

He said that  Qatar is looking ahead to build stronger trade and investment relations between financial sector in Qatar and its counterpart in the United States,” he said.

Governor, Qatar Central Bank held bilateral discussions with participating companies to learn about their best practices and prospects of benefiting from them in the financial and banking sectors in Qatar.