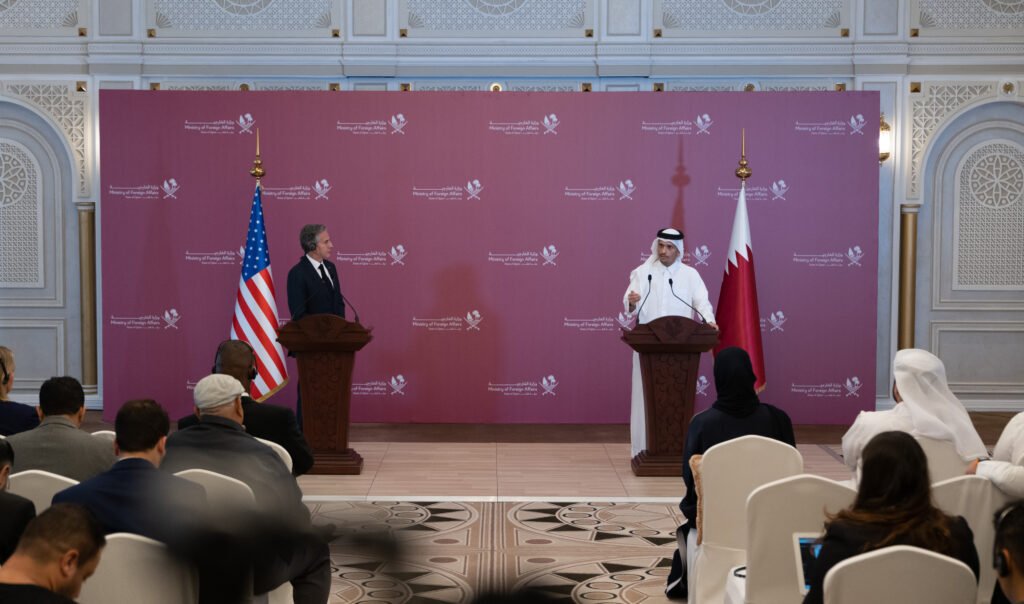 In a joint press conference with the US Secretary of State Antony Blinken on the sidelines of the fifth US-Qatar Strategic Dialogue, held in Doha, Sheikh Mohammed bin Abdulrahman AlThani considered this round of the dialogue as an important platform in strengthening those relations that enjoy stable and solid foundations and multifaceted partnership.

Deputy Prime Minister and Minister of Foreign Affairs of State of Qatar indicated that the US-Qatar Strategic Dialogue represented an opportunity to address several issues ranging from regional issues and today’s global challenges, discuss the latest development concerning the nuclear deal, the developments in Iraq, Lebanon, and Libya, and the Palestinian cause that Qatar sees as its central cause; in addition to joint efforts in Afghanistan.

He pointed out that this round of dialogue discussed joint cooperation in responding to global challenges, especially the challenges of energy, food security, and other developmental challenges that the world faces today.

Sheikh Mohammed bin Abdulrahman Al-Thani added that the State of Qatar and the US share the same point of view regarding these issues, and they look forward to working together among the team works that will resume the talks between the concerned institutions in both countries.

He added that the State of Qatar always looks forward to strengthening its cooperation with the US, and always having an open dialogue and a relationship based on transparency and mutual trust between the two countries.

He valued the cooperation shown by the US with its various institutions in support of hosting the FIFA World Cup Qatar 2022. He  xtended his thanks for all the efforts, especially those of the US security and cybersecurity institutions, for the support they provided to Qatar in favor of hosting this tournament, pointing out that this is seen as a part of the cooperation that extends beyond the multiple partnerships between the two countries.

In his response to the media attack on the State of Qatar, Sheikh Mohammed bin Abdulrahman Al-Thani noted that the State of Qatar, when it was awarded the honor to host FIFA World Cup Qatar 2022, was determined to have multi-faceted tasks to attain this organization that impressed the entire world.

He said that many people think that the world cup was the main reason behind the reforms that have been made in the recent years, however, Qatar sees the world cup as merely a catalyst for that process. He stressed that change is an ongoing process, unconnected to a specific event or stage, noting in this regard that the vision of the Amir Sheikh Tamim bin Hamad Al-Thani is a transformational vision for the State of Qatar in terms of keeping pace with developments taking place around the world.

He confirmed that the human rights issue in the State of Qatar is the state’s responsibility toward the Qatari people and everyone who lives on the land of Qatar, stressing that the State of Qatar has been decisive on this matter, pointing out that the reforms adopted are intended to serve this objective.

He added that the State of Qatar cannot alter the opinions of those who want to compromise its reputation to attain their goals or other intentions, adding that such goals have nothing to do with the State of Qatar, however, the vast majority of people and football masses when they came to Doha were surprised by the success of the preparations. His Excellency also pointed out that the State of Qatar and the Qatari people are always generous and welcome all people.

He pointed to the joy in the eyes of people by hosting this event, including the happiness of the masses and the joy at their participation and their enjoyment of trying something new that has not been tried before.

He noted the existence of a work program through which the State of Qatar and the United States have teamed up to build the capacities among the various institutions and the law enforcement agencies, in addition to learning and utilizing the expertise available in the United States, pointing out that there are points of agreement and points of disagreement, because such matters are usually appropriate in the society in which they are applied.

Qatar’s Foreign Minister conveyed a message to the media and public opinion that the State of Qatar welcomes all people and its doors remain open, calling for the importance of focusing on football and everything that happens on the pitch, adding that those who would like to launch prejudgments solely for achieving other goals, will only have a temporary impact, but ultimately the reality on the ground will prevail to talk about itself.

He looked forward to making the tournament in Qatar a station for the convergence of peoples, cultures and all civilizations to enjoy the atmospheres provided by Qatar in Doha, as well as the hospitality experience of the Qatari people and the residents on the land of Qatar.

US Secretary of State Antony Blinken said that the State of Qatar has outdone the United States in hosting this amazing and detailed dialogue, just like it did in terms of entertainment.

He added that bilateral relations are at the peak point of the 50-year diplomatic relations and that cooperation is now stronger than ever before, the result of which is that the US and Qatari peoples are now in a better situation. His Excellency also said that the security relationship with Qatar is the most powerful one, highlighted by the fact that Qatar hosts one of the largest US military bases in the region, noting that it serves as an anchor for regional security and stability.

He pointed out that the US president Joe Biden designated Qatar as a major non-NATO Ally last March. He also said that this was followed several months later by delivering F-15 aircraft to Qatar Amiri Air Force to augment its defensive capabilities and made the armies amenable to interoperability.

The US Secretary of State Blinken affirmed that the United Sates and the State of Qatar are engaging in the region and outside the region to bolster stability, defuse tensions and end the conflicts, noting that Qatar had provided vital economic aid to the Palestinian people, helped pay the salaries of the security forces in Lebanon and has been a mediator in the peace agreement between the Chadian transitional government and the opposition groups, adding that Qatar is constantly working to heal the regional rifts which is essential in addressing the common challenges facing the US and its partners.