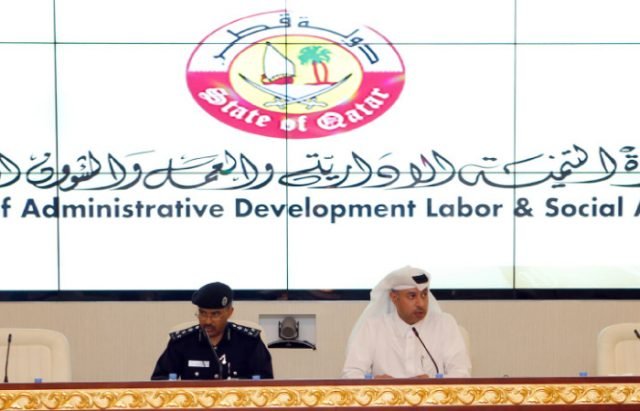 Law No. 21 of 2015, the new law that abolishes the Kafala (sponsorship) system and guarantees greater flexibility, freedom and protection to Qatar’s more than 2.1mn expatriate workforce comes into force today.

The eagerly-awaited law introduces new provisions regulating the entry, exit and residency equirements for all workers in the country. The new measures come one year after HH the Emir Sheikh Tamim bin Hamad al-Thani signed labour reforms into law. The decree replaces the Kafala system with a modernised, contract-based system that safeguards worker rights and increases job fl exibility.

Discussing the announcement at a press conference yesterday, HE the Minister of Administrative Development, Labour and Social Aff airs Dr Issa Saad al-Jafali al-Nuaimi said: “The State of Qatar is enormously grateful to the millions of workers who have come to Qatar to build our nation’s infrastructure during this period of rapid change. The new law is the latest step towards improving and protecting the rights of every expatriate worker in Qatar. It replaces the Kafala system with a modernised, contract-based system that safeguards worker rights and increases job fl exibility.

“We welcome any comment or constructive criticism, and will continue to do so in the future. However, we urge the international community not to draw any defi nitive conclusions until there has been time to see the new law in action. At its core, we are doing this because we believe it is the right thing to do and because it provides tangible new benefi ts to expatriate workers. This is why we will work diligently to ensure it is properly implemented, including increasing our monitoring capabilities and hiring more compliance inspectors to tighten the net on companies who violate the law.”

On the subject of enforcing the law, Brigadier Mohamed Ahmed al-Atiq, Director General of the Department of Passport and Expatriates Aff airs in the Ministry of Interior, said: “Enforcing Law No. 21 of 2015 is a government priority. Its success will be measured by how it is implemented in the weeks, months and years ahead.” Under the new rules, freedom of movement is explicitly guaranteed.
According to a statement issued by the Ministry of Administrative Development, Labour & Social Aff airs (MADLSA), expats have the right to leave the country after notifying the employer, whether to take leave or for an emergency.

“Expats also have the right to permanently leave the country before or after completing the duration of their contract, after notifying the employer according to the terms of the contract.
“If the employer rejects a leave request, the migrant worker can appeal to the Exit Permit Grievances Committee, which has to respond to all requests within 3 days. The applicant will be able to leave the country unless he is wanted in connection to any active criminal proceedings, or has defaulted on any debt in Qatar that remains unsettled.

“Expats will no longer need approval from their existing employer to change jobs if they complete the length of a fi xed-term contract. Individuals in open-ended contracts will also be able to change jobs without their existing employer’s permission, provided that they complete a fi ve-year service period.
“All prospective migrant workers will be able to see a copy of their job contract, prior to leaving their country of origin, as obtaining a work visa will now require the existence of a job contract approved by the Ministry.

“Employers found to have con-fiscated passports can be fined up to QR25,000 per worker. When enacted, this will be the toughest fi nancial penalty against passport confi scation within the region. (End)