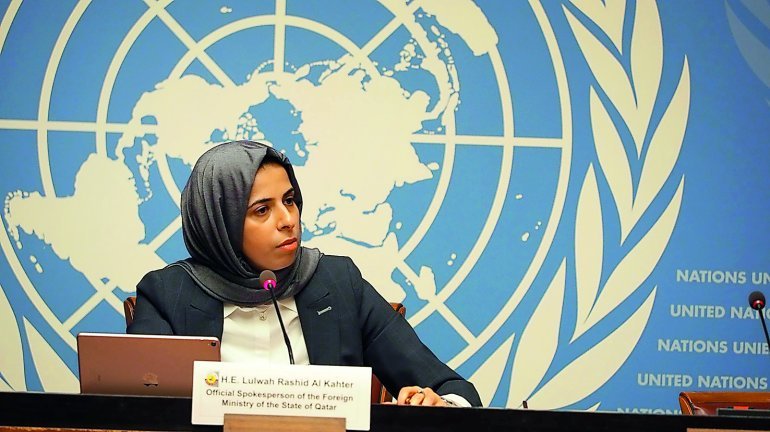 Lulwah Rashid Al Khater, the official spokesperson for Ministry of Foreign Affairs of Qatar  has affirmed Qatar’s continued welcome to the Kuwaiti mediation to solve the Gulf crisis, while also expressing her hope for a response and interaction of the siege countries with this mediation by taking serious steps to get out of the crisis.

At a press conference held in Geneva, Switzerland, on the sidelines of the Human Rights Council, Al Khater said that affirmation of the siege states that the only way out of this crisis is through Kuwaiti mediation is a good development and progress by the siege countries, stressing that the State of Qatar welcomes Kuwaiti mediation and respects the positive and active role of Emir of the State of Kuwait Sheikh Sabah Al-Ahmad Al-Jaber Al-Sabah.

She added that Emir of State of Qatar, Sheikh Tamim bin Hamad Al-Thani was the only leader among the parties of the Gulf crisis who attended the GCC summit in Kuwait in appreciation of Kuwaiti mediation, urging the siege countries to take serious steps and to respond to the Kuwaiti mediation appeals to return to the dialogue table.

She said the siege imposed on the State of Qatar by Saudi Arabia, the UAE, Bahrain and Egypt by closing land, sea and air routes is illegal, noting that about 90% of the food and medicine entered Qatar via Saudi Arabia and the UAE.

She also emphasized that Qatar overcome the economic siege within 48 hours by finding and establishing new and alternative air routes or sea lines through Kuwait, Oman, India, Pakistan and other countries.

Qatar remains the fastest growing economy among the GCC countries despite the siege, she said, noting that Qatar remains the world’s first exporter of liquefied natural gas and the second largest exporter of helium gas. Qatar’s economy is strong, but its concerns about the Gulf crisis are threefold: human rights violations, regional security, and the insistence of the siege countries to resort to the back-door-policy instead of dealing with diplomatic and political channels, she said.

She said that the siege countries were able to destabilize the GCC system, which was considered, especially in the wake of the Arab Spring, as a contributing factor to stability and as the most stable bloc in the region.

Al Khater went on saying that Qatar’s concern and main worry lies in the regional security and the repercussions of the siege on it, despite the fact that Qatar has overcome its economic impact. “We are also concerned about the siege countries’, especially GCC members, use of the back door tactics, to defame Qatar and damage its image in Western countries,” she added pointing that the siege countries departed the diplomatic means and opted for back doors tactics and fanning tribal celebrations that they decided to organize. Al Khater saw a great contradiction between announcing a major reform agenda and adopting a sectarian and tribal discourse, stressing that blocking the diplomatic process is disturbing.

“The plots and attempts to tamper with Qatari currency, in some countries, will be legally addressed by Qatar Central Bank,” she said pointing to evidences linking this case to one of the siege countries, a GCC member.

Lulwah Al Khater called for revisiting the report of the technical mission of the Office of the United Nations High Commissioner for Human Rights (OHCHR) issued in December 2017, saying that the mission visited the State of Qatar and wanted to visit the siege countries to study their positions, but those countries refused to welcome the mission.

Al Khater said that the technical report has documented 504 cases of violation of the right to education, 1174 cases violations of the right to property and 629 cases of families separation in addition to 1261 cases of suspension and restrictions of freedom of movement and communication, pointing to the existence of 6500 marriages of Qatar citizens and citizens of the siege countries. “These families are now deprived from the right to reunification in one country,” she added.

She referred to the contradiction that the siege countries claim to establish free trade zones, while politicize the economic dimension and deprive Qatari businessmen and businesswomen from access to their property and investment, pointing that the National Commission for Compensation documented about 4500 complaints by individuals who are unable to access their investments and property in the siege countries/

The Foreign Ministry’s Spokesperson went on saying that the report of the technical mission concluded that the siege targeted the State of Qatar and Qatari citizens, and that the measures taken by the siege countries were unilateral, while Qatar did not reciprocate by imposing similar measures on the citizens of these countries, stressing that the report describes the measures taken against the State of Qatar as an economic war, and described the media discourse in the siege countries to a hate speech against Qatar and Qatari citizens.

“The technical mission, two times, gave the siege countries the opportunity to respond, but they refused to. After publishing the report in December, 2017 the siege countries described it as biased and politicized instead of addressing the issues at hand,” she said.

AlKhater said following Deputy Prime Minister and Foreign Minister Sheikh Mohammed bin Abdulrahman Al-Thani’s speech before the Human Rights Council, the siege countries responded with a statement that does not address the actual violations, describing the violations in the report as a “minor issue” and saying that international community is not concerned with this issue at all.

There is no surprise in the response of the siege countries, given their human rights record not only against Qatari citizens but also against their own citizens, she said.

AlKhater continued by saying it is not surprising because they are not interested in human rights violations against Qatari citizens under the siege. This is normal for them, but for us, any violation against a Qatari citizen is a great deal of importance to us. We are keen and we will seek that every citizen get his rights and receive his appropriate compensation.

She pointed out that the siege countries indicated in their response that this crisis is a diplomatic one caused by Qatar, but the fact is that on June 5, these countries decided to cut ties and close their borders with Qatar, which 90% of its food and medicine imports come through them.

Replying to a question by Spanish news agency, Lulwah Al Khater said that Qatari diplomacy has been very active recently, pointing out in this regard to the US-Qatari dialogue which was held at the end of January in Washington, as well as several tours made by Qatari diplomacy in various continents.

On Qatar’s complaint to the World Trade Organization (WTO) against the siege countries, she answered a question by Turkish Anadolu Agency saying that the State of Qatar continues to take legal steps in this direction.

She added harm occurred at different levels to individuals, companies and government institutions, and this will be addressed through different channels, explaining that the rights of individuals are pursued by the National Human Rights Committee through a group of lawyers.

With regard to the companies affected by the siege, Lulwah Al Khater said the documentation of the damage is going on but takes time in term of the preparation of documents and evidence collection, stressing that things are moving forward in this regard in what needed to be done by other parties.

Responding to a question by the UAE news agency about why Qatar does not take steps to address concerns and fears of the four countries if it is keen to resolve the crisis, the official spokesman of the Foreign Ministry wished that the siege countries would sit down with Qatar face to face to hold dialogue and civilizational debate to bring these fears to Qatar just as this reporter is sitting down and raising them here.

Commenting on what the UAE news agency correspondent said regarding what was reported by Al Jazeera news channel, she said if Al Jazeera aired content that some parties do not like, these parties should respond through their media as it is done in civilized countries that have multi-spectrum media. As the siege countries have observations on Al-Jazeera, Qatar also has professional observations on the media of the siege countries, she said, stressing at the same time that she will not defend Al Jazeera. “They (Al Jazeera) are present in the Hall and they can defend themselves if they wish.”

She also expressed surprise at the politicization of religion and the use of its figures to attack Qatar, adding that politicization also affected sports and social relations.

Lulwah Al Khater criticized the contradiction in the siege countries’ discourse, as they talk locally about Qatar’s relations with Iran and to Western audience about Qatar’s relationship with terrorism, citing the speech of the UAE Minister of State for Foreign Affairs Anwar Gargash in a lecture in Britain that the crisis with Qatar has nothing to do with Iran, but with terrorism, asking about the reason behind contradiction between the local and international discourse.

She also asked about the reason why the siege countries have not present a single document to the Kuwaiti mediator or the US side to prove Qatar’s support for terrorism, pointing that the State of Qatar has signed counter-terrorism agreements with several countries.

In response to a question by Reuters about the situation in Syria, HE Lulwah Al Khater explained that the State of Qatar has been supporting Geneva 1 since the beginning.

she also voiced Qatar’s concern about the military operations in Eastern Ghouta, describing the situation there as catastrophic.

The State of Qatar appealed to all sides to stop military operations and allow aid to reach the Syrian people, she said reminding of Qatar’s call for transitional justice. Failure to realize justice means that terrorist groups can find people’s grievances a pretext for violence, she added.

She also warned in this context of the return of a new version of ISIS and other extremist groups.

On the peace talks between the Taliban movement and the government of Afghanistan, HE Lulwah Al Khater confirmed that there is nothing currently under way, pointing out that Qatar is always coordinating with the US in this regard.

As for the attempts to deprive Qatar from organizing the 2022 FIFA World Cup, the Foreign Ministry’s Spokesperson expressed hope that this is not the purpose of the siege, stressing that Qatar is continuing to build the necessary infrastructure for the World Cup.

She affirmed that the World Cup will be held in Qatar, calling on the international media to come to Qatar and see the progress in of World Cup projects.