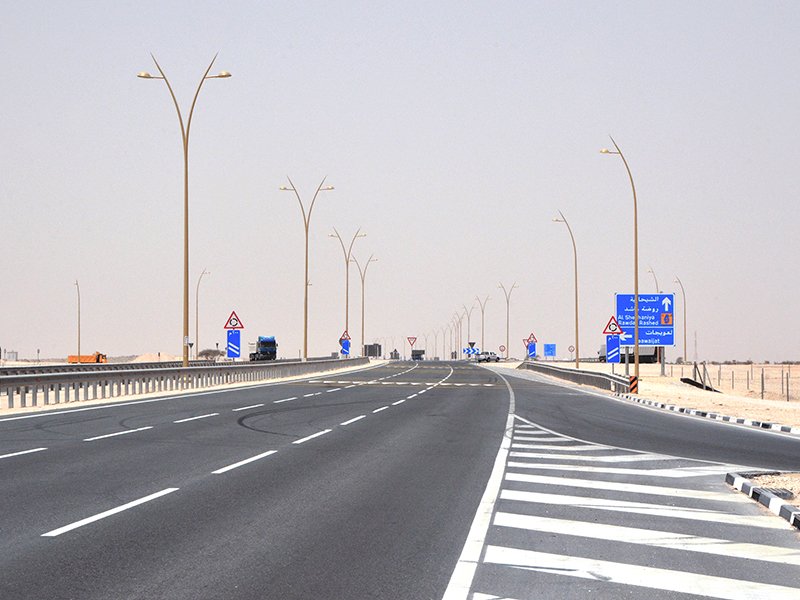 The Public Works Authority ‘Ashghal’ announced the completion of the third phase of Rawdat Rashed Road Development Project, which aimed to provide a safe, highly-developed road to link Salwa Road with Dukhan Highway. The road is now fully open to traffic.

Eng. Ahmed Al-Obaidly, Head of Southern Areas Section at the Roads Projects Department in Ashghal, pointed out that phase 3 of the project involved the construction of a 14-km-long road, extending north from the end of Phase 2 at the new roundabout located north of Rawdat Rashed Village, till Lebsayyer Interchange at Dukhan Highway.

Eng. Al-Obaidly added that this phase included the provision of street lighting systems, safety barriers, road signs, pavements and all other services and utilities, which include 29-km long water lines, 31-km long electric cables, 100-km long telecommunications lines, and intelligent transport systems (ITS). The scope of works also involved the construction of 3.6 km of surface water lines, an emergency flooding pond, in addition to new substations.

The 3rd Phase of Rawdat Rashed Road Development Project was implemented by Boom Construction Co. and Lotus Trading and Contracting Co. JV, at a total cost of QAR 384.5 million.

It is worth mentioning that phase 3 is part of the main project aimed to develop Rawdat Rashed Road with a total length of 33 km and three lanes in each direction. Rawdat Rashed Road extends perpendicularly to Salwa Road (north side), bypassing Rawdat Rashed area to Dukhan Highway, which contributes to diverting the traffic away from the residential part of Rawdat Rashed. The project also improves the road capacity by increasing the number of lanes and allocating the right lane for heavy trucks; enhancing the traffic safety. The project will also link the current and future developments with key areas in Qatar.

In October 2016, Ashghal opened phases 1 and 2 of the project at a length of 20 km. Phase 4, which already started in November 2017, will link Rawdat Rashed Road with the existing bridge at the intersection with Salwa Road, where a new bridge will be constructed parallel to the existing one for more traffic capacity. The road will also be connected to the existing bridge on the intersection with Dukhan Highway (Exit no. 42 – Lebsayyer Interchange) and a new bridge will be also constructed to accommodate the expected traffic flows. This phase is scheduled for completion in Q4, 2019.