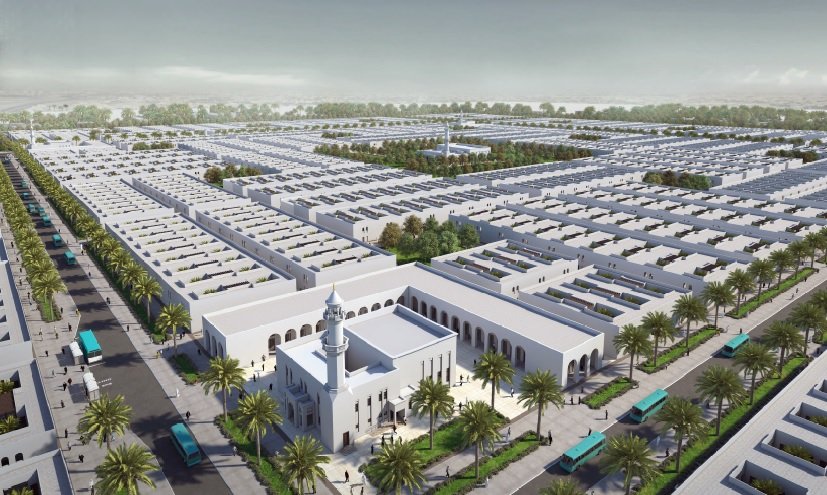 ‘Barwa Real Estate Company’ has signed a leasing contract with the Ministry of Municipality and the Environment for the rental of two plots of land with a total area of 1,179,114 square meters on Salwa road to develop new labor city project.

The new project will be the second labor city to be developed by Barwa Real Estate after the workers’ accommodation – Barwa Al Baraha which is located in the Industrial Area. It consists of 64 buildings, accommodating 50,000 workers and technicians and provide all the recreational and health services for its residents.

This is in addition to Al Khor Workers Sports Complex in Al Khor area which includes all facilities and sports services for workers. These projects demonstrate Barwa’s keenness on introducing community initiatives that serve the labor sector, to which Barwa pays a great deal of attention.

Occupying an overall area of 994,567 square meters on Salwa Road, the project includes the construction of 3,170 residential houses, each comprising of 8 rooms, 8 bathrooms, and a kitchen, in addition to retail shops and masajid with a total building area of 730,728 square meters. Moreover, the construction will include all the infrastructure works consisting of 25 power substations, internal roads, and potable water, fire, irrigation and sewage networks as well as surveillance cameras.

An adjacent land plot of 183,538 square meters was allocated as parking lots for buses, in order to reduce traffic congestion within residential areas.

The project comes as part of the Qatari government’s efforts to improve the housing standards of workers in Qatar and meet the needs of the local market in line with the objectives of the Qatar National Vision 2030 and Qatar’s preparations for hosting the 2022 World Cup, through developing a sustainable residential environment in terms of quality and security and providing all required services and facilities.

Dr. Issa bin Saad Al Jafali Al Nuaimi, Minister of Administrative Development, Labor and Social Affairs stressed the importance of these types of projects that serve the State’s plans to implement development projects that meet the needs of the labor sector. Such projects demonstrate that the State of Qatar spares no effort to provide all means of improving the living conditions of the expatriate workers.

He added that the State of Qatar is a model for providing all means for the workforce to coexist with their different religions and cultures. Dr. Al-Nuaimi said that the Ministry of Administrative Development and Labor has embarked on a new and comprehensive program to improve the housing standards of workers through the construction of modern housing in line with international standards and the Qatar National Vision 2030 as well as providing health care facilities.

He also commended Barwa Real Estate’s awareness of its role and  contribution to the implementation of various developmental projects. He expressed his hope that more developers will be able to implement such projects to serve the expatriate workforce.

The project was designed to ensure the privacy of the city’s residents unlike the existing workers’ houses in the unplanned areas. It includes a private courtyard for each house, allowing its residents to enjoy the outdoor activity while ensuring their privacy. The traditional Arab style of the project’s houses is compatible with the surrounding environmental conditions. Such designs help improve the living conditions of the workers, ensuring a healthy environment and providing all amenities, while taking into account the diversity of their nationalities and cultures.

Salman Bin Mohammed Al Mohannadi, Chief Executive Officer of Barwa Real Estate Group, expressed his pleasure with signing the construction contract of the new labor city, demonstrating Barwa’s commitment to contributing to the country’s plans to provide housing for workers, that take into consideration the balance between sustainability and the provision of all facilities and services, complying with international standards.

Al-Mohannadi reiterated the Group’s commitment to its vital role in supporting development projects, serving the overall urban expansion of the country and effectively helping in implementing the Qatar National Vision 2030 that aims to achieve the welfare of the country and the citizen. Al Mohannadi also confirmed Barwa’s keenness on fulfilling the completion of the project with the highest standards.