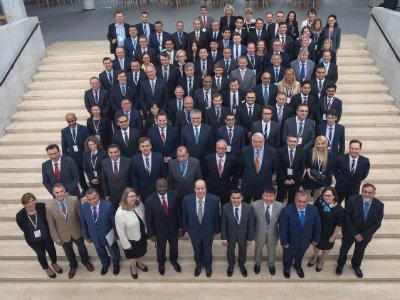 The State of Qatar took part in the Annual NATO Conference on Weapons of Mass Destruction (WMD) Arms Control, Disarmament and Non-proliferation held in the Finnish capital of Helsinki.

Qatar’s Ambassador to Austria and Permanent Representative to the International Organizations in Vienna, HE Sheikh Ali bin Jassim Al-Thani, who represented the State of Qatar at the Conference, has discussed the establishment of a nuclear-weapon-free zone and other weapons of mass destruction in the Middle East along with other issues with the participation of a number of Arab countries.

The establishment of a WMD free zone in the Middle East would contribute to regional and international peace and security, lead to a nuclear-weapon-free world in accordance with article VI of the Treaty on the Non-Proliferation of Nuclear Weapons (NPT) and bring us closer to the goal of the total elimination of nuclear weapons, HE the Ambassador said.

He stressed the importance of putting into action the 1995 NPT Review and Extension Conference Resolution on the establishment of the zone, stressing that this resolution shall remain in force until all its objectives were achieved.

The implementation of the Middle East resolution according to the mechanism of the 2010 Review Conference of the Parties to the Treaty on the Nonproliferation of Nuclear Weapons (NPT) is still possible, HE Sheikh Ali bin Jassim Al-Thani said, urging the United States, Russia and the United Kingdom, the treaty depository powers, to shoulder their responsibility in this respect.

More than 100 high-level officials and experts from over 50 countries and international organisations met in Helsinki from 29 to 30 May 2017 to discuss multilateral non-proliferation regimes and initiatives in view of a changing security environment. They also addressed regional proliferation challenges in the Middle East and in Asia, as well as NATO’s policies and other international organisations’ efforts in the area of Weapons of Mass Destruction (WMD) arms control and disarmament.

This year’s conference, hosted by Finland – one of NATO’s most active partners and a valued contributor to NATO-led operations and missions – took place in the context of an increasingly challenging global security environment.