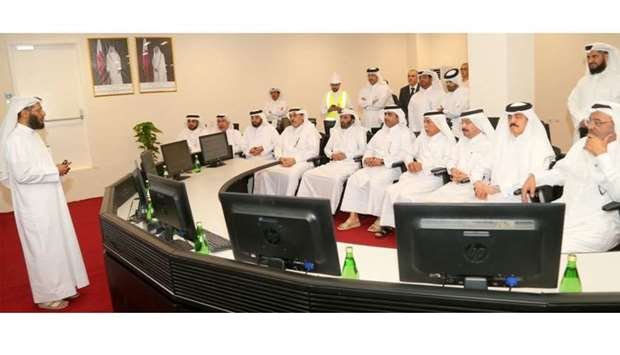 As per Qatar News Agency, AlNasr was presenting details of the project to Ahmed bin Abdullah bin Zaid Al Mahmoud, Speaker of Advisory Council of State of Qatar who visited Al Thumama Site on Tuesday.

Al Nasr noted that the project worth QR 14.5 billion and is being implemented in five areas in the country, including Umm Salal, Al Thamama, Rawdat Rashid and Umm Baraka. It is expected to be completed by the end of 2018.

Al Nasr reviewed the great efforts exerted by KAHRAMAA to implement this project within the framework of the State’s plans to raise strategic water reserves, highlighting the success achieved by operating the project six months ahead of schedule.

He underlined that the unjust siege, which came at a sensitive time in the process of implementation of the project, did not affect the progress of work thanks to the strong relations with the international companies contributing to the implementation, and the confidence of these companies and their keenness on implementing projects in Qatar. The companies shipped equipment, pipes and pumps by air and on board the largest cargo aircraft in the world without financial burdens on the state, Al Nasr added, noting that water projects in Qatar are the largest in the world.

He said that the completion rate of the project in Al Thumama site exceeded 90% and ranges in other locations between 85 and 90%, explaining that all construction work has been completed and the remaining are only complementary.

Al Nasr explained that the project includes 15 water reservoirs, each with a capacity of one million gallons. He highlighted the distinguished role of Qatari cadres in the implementation of the project, including the project manager, engineers and supervisors, which means a full national management of Qatari youth.

He noted that KAHRAMAA completed more than 105 million working hours in the project without injuries.