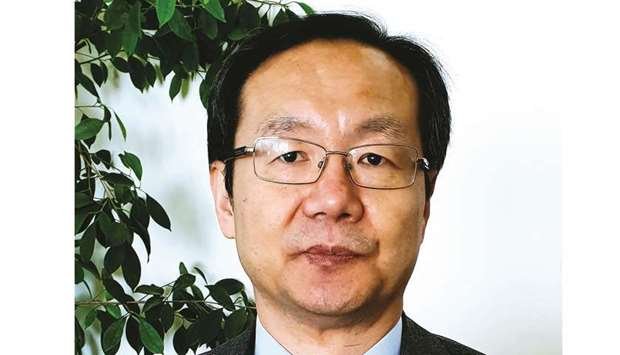 Ambassador of Korea to Qatar Kim Changmo praised the development in Qatar in all areas and its ability to face the challenges with full capacity, noting its vital role at the regional and international levels as a mediator for resolving international disputes.

In his statement to Qatar News Agency (QNA), the envoy congratulated Qatar, His Highness the Amir, the Government and the people on the occasion of the National Day, indicating that it is an occasion to emphasize the importance of the distinguished relations between Qatar and the Republic of Korea.

He said that the two countries have developed close and friendly relations since they established the diplomatic relations in 1974, adding that over the past several years, Qatar has been the largest supplier of LNG to Korea and the eighth largest overseas construction market for Korea, while Korea is Qatar’s second largest trading partner.

He stressed that Qatar and Korea have many things in common, such as the fields of education and diplomacy, information and communication technology and wise leadership, which qualifies them to be partners in strategic cooperation. Ambassador Changmo referred to the historic visit of His Highness the Amir to Korea in January 2019, and the visit of the Korean prime minister to Qatar after six months, explaining that the leaders of the two countries approved nine bilateral MoUs covering different areas of cooperation, such as smart agriculture, aquaculture, transportation, security and education, and the signing of LNG shipbuilding agreements between Qatar Petroleum and Korean companies in June, which also shows the long-term trust between the two countries for over the past 20 years in the LNG sector.

He expressed his confidence that co-operation between the two countries in the fields of energy and construction will witness greater development, and that co-operation will be expanded in new areas in the future. The Korean ambassador noted the strength of the Qatari economy, saying that it has exceeded the pre-blockade level and achieved greater self-sufficiency in many sectors, including dairy and agriculture. He praised Qatar’s vital role at various levels, stressing that the blockade did not deter Qatar from providing humanitarian aid to many countries and playing a pioneering role in addressing critical global issues.

Qatar’s role as a mediator in resolving deep-rooted international conflicts such as the conflict in Afghanistan, is a source of inspiration for many countries, and it is also impressive that Qatar has successfully hosted major international sporting events this year, despite the great difficulties due to Covid-19 pandemic, the ambassador added.

In this context, he praised the successful handling of Covid-19 pandemic by the Government of Qatar, as well as its continuous and active involvement in the international arena under the wise leadership of His Highness the Amir Sheikh Tamim bin Hamad al-Thani.

The Qatari government’s response to the pandemic was very effective in controlling the crisis. Since the first case of the virus was reported in Qatar in February, the Qatari government acted quickly and proactively. The entire process was transparent and open. And at a time when many countries are witnessing the outbreak of the second wave of the virus, the situation in Qatar is stable thanks to the efforts made by the Qatari government in the examination processes, early testing and contact tracing, noting that Qatar has one of the lowest rates of deaths related to the virus in the world, he said.

The Korean ambassador praised the humanitarian aid provided by Qatar to many countries of the world in response to the Coronavirus pandemic, which included more than 80 countries, and said that Qatar has also spared no effort to strengthen international co-operation in addressing the pandemic by supporting the World Health Organization and The Global Alliance for Vaccines and Immunizations.

He stressed that international co-operation is imperative to overcome the pandemic in a world, noting that Korea and Qatar, as members of the UN Group of Friends of Solidarity for Global Health Security, are working closely together to develop a major international platform for free discussions and stronger co-operation on health security issues.