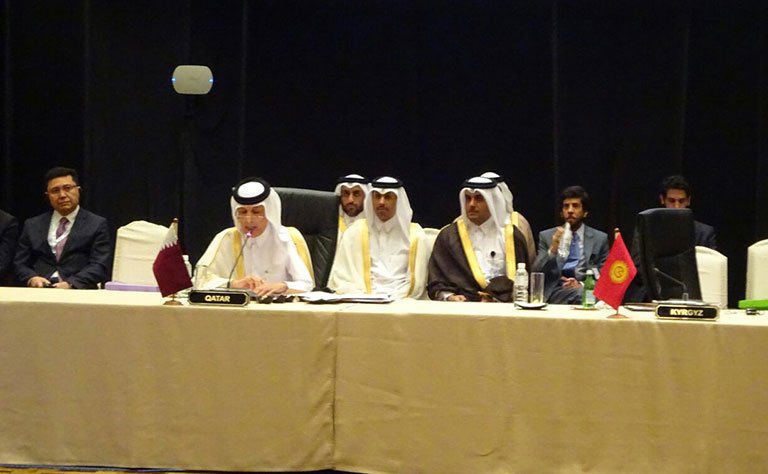 Sultan bin Saad Al Muraikhi, Qatar Minister of State for Foreign Affairs called for finding a solution for the issue of Rohingya Muslims in Myanmar through peaceful and comprehensive settlement and dialogue so as to achieve national unity.

Al Muraikhi is attending OIC Foreign Ministers meeting in Kuala Lumpur to discuss the situation of the Rohingya Muslims minority in Myanmar.

Al Muraikhi stressed Qatar’s belief that conflict settlement should be done through peaceful means and through moderation so as to bring closer points of view of the parties to the conflict, noting that impacts of disputes and conflicts are not confined to a certain geographic area but rather go beyond borders to threaten global security and peace.

He said that the Muslim world still faces several challenges that affect its unity and stability and limit cultural interaction and global cooperation. The minister said that stability in the Muslim world will reflect on the whole world and settling disputes in Muslim states will help in building global peace and consolidating human values.

He said the Rohingya issue is a humanitarian issue in the first place and requires dialogue and new patterns of cooperation and partnerships, adding that settling disputes is not inseparable from development projects, achieving transitional justice, the rule of law and good governance, and addressing human rights violations.

Al Muraikhi said Qatar supports national reconciliation and backs all efforts that aim raise regional and international awareness of the effects of the issue, adding that Doha has pledged financial aid to some neighboring countries to cover the costs of hosting Rohingya refugees as well as aid inside Myanmar, particularly in Rakhine State.

Qatar State Minister for Foreign Affairs said that Qatar’s keenness on a peaceful settlement stems from its firm belief that if clashes, hate speech and incitement to violence continue, an environment of violent extremism from all sides as well as chaos might be created, which, he added, will negatively affect the peace and stability of the whole region.

Al Muraikhi said OIC and the international community have a responsibility to play a major role in raising the level of cooperation so as to establish a mechanism at the regional and international levels to solve the issue of Rohingya. He added that all concerned sides must cooperate to settle the issue in a way that helps Rohingya live in dignity with their fellow citizens in a safe environment where stability, prosperity, growth and national unity prevail.

He extended thanks to Malaysia for hosting the meeting as well as the warm reception and hospitality, praising the efforts of OIC general secretariat in preparing for the meeting and its efforts to reach a peaceful settlement for the issue.

Doha, 25 June 2022 THE Embassy of Nepal and the Non-Resident ...
END_OF_DOCUMENT_TOKEN_TO_BE_REPLACED