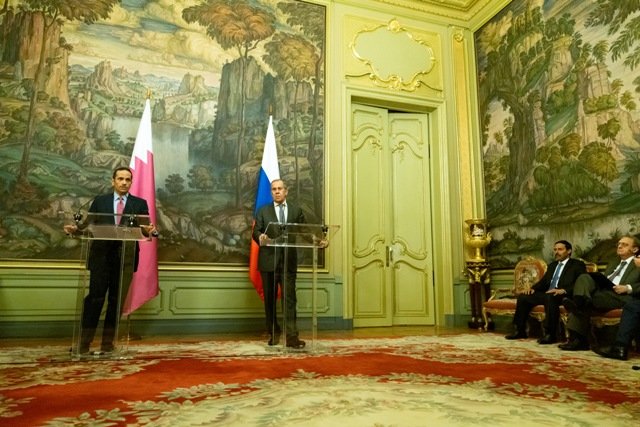 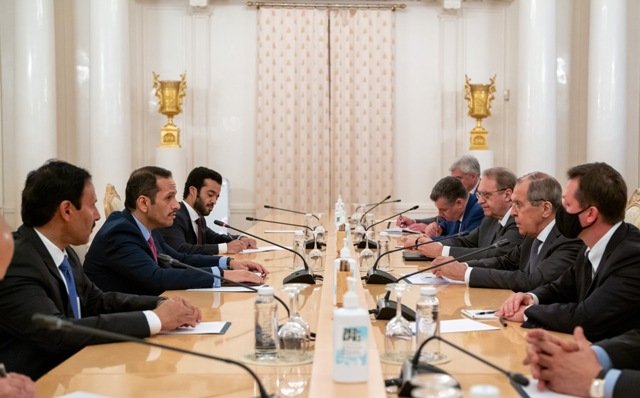 Sheikh Mohammed bin Abdulrahman Al-Thani, Deputy Prime Minister and Foreign Minister of State of Qatar underlined that Qatar and Russia agree on the need to find a solution to the situation in Afghanistan, and that humanitarian aid should be independent of any political developments, adding that the Taliban should coordinate to secure the exit of those who wish to leave the country.

Speaking at a joint press conference with Minister of Foreign Affairs of the Russian Federation, Sergey Lavrov in Moscow on Saturday, Sheikh Mohammed stressed the importance of Afghanistan’s stability and security, and the need to take the concerns of Afghanistan’s neighboring countries into consideration, expressing his hope that the world would see the Taliban’s promises come true.

He noted that the two sides discussed the issue of Kabul International Airport and the need to establish a humanitarian aid corridor and support the freedom of movement, emphasizing the importance of the international cooperation and consensus to support the current process in Afghanistan.

He added that the Qatari and Russian sides also discussed the bilateral relations in all fields, noting that the meeting of the Qatari-Russian joint committee will be held before the end of the year.

He noted the joint keenness to strengthening the trade relations between the two countries, and affirmed Qatar’s willingness to expand investment relations with Russia, especially after its participation in St. Petersburg International Economic Forum.

He noted the importance of exchanging experiences on organizing sporting events, expressing the State of Qatar’s aspiration to benefit from the Russian experience in this field.

He said that the two sides also discussed the security situation in the Gulf, stressing that the State of Qatar welcomes regional initiatives aimed at supporting stability and prosperity in the region.

On the Palestinian issue, Sheikh Mohammed bin Abdulrahman Al-Thani believed that the Palestinian-Israeli conflict can be resolved only through the resolutions of international legitimacy and the realization of the two-state solution.

Russian Foreign Minister Sergey Lavrov said that the Qatari and Russian sides seek calm and stability in Afghanistan, explaining that they discussed international initiatives and visions regarding the stability of Afghanistan, and they agree and are committed to accelerating the pace of these initiatives, especially those concerned with the humanitarian situation.

He welcomed the Qatari initiatives and endeavors aimed at achieving stability and prosperity of Afghanistan, noting the effective Qatari role in the intra-Afghan talks.

He highlighted the important role carried out by the State of Qatar for the continuation of dialogue between the Afghan parties, and its quest to see the Taliban’s commitments achieved, especially with regard to reaching a government that represents all Afghan society.

Lavrov noted that the State of Qatar and the Russian Federation agree on the need to give priority to the humanitarian situation and aid in Afghanistan, adding that the two sides discussed fears of the continued flow of refugees and its repercussions on the neighboring countries.

He indicated that the Qatari and Russian sides discussed bilateral relations and files in the Middle East and North Africa, including Syria and the Palestinian issue, stressing the joint keenness on developing and strengthening the bilateral relations in all fields.