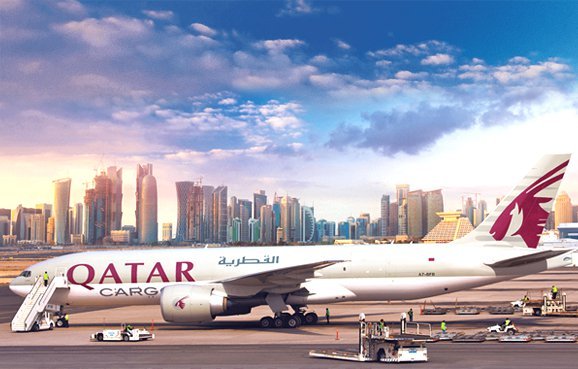 Ulrich Ogiermann, Chief Officer Cargo, Qatar Airways said: “We are excited to take delivery of the newest freighter just days after our first Boeing 747-8F nose loader freighter joined the fleet, and at a time when we are increasing our capacity and frequencies as part of our network expansion strategy. The new freighters will be deployed on long haul routes in scheduled services and will further boost QR Charter services, allowing us to provide bespoke air charter services for various industries, including the industrial and oil and gas sectors.”

Qatar Airways Cargo received delivery of its first Boeing 777 freighter in 2010, and today the cargo carrier operates a fleet of 13 Boeing 777 freighters on long-haul routes to the Americas, Europe, Asia Pacific and select destinations in Africa. With a payload capacity of more than 100 metric tonnes, the Boeing 777F is capable of flying 9,070 km. The aircraft range capability translates into significant savings for cargo operators as it requires fewer stops and associated landing fees, less congestion at transfer hubs, lower cargo handling costs and shorter cargo delivery times. The capacity of the Boeing freighters and the plane’s economics make it a highly attractive addition to the fleet.

The cargo carrier provides its customers a young and modern fleet of belly-hold aircraft and freighters across a truly global network. Qatar Airways Cargo recently announced the commencement of Boeing 777 freighter services to Pittsburgh, its seventh freighter destination in 2017 and thirteenth in the Americas, starting on 11 October.

Qatar Airways Cargo has made substantial investment in its operations at its Doha hub to ensure all cargo deliveries are processed efficiently and seamlessly. Special facilities and well-trained personnel ensure expert handling over a wide variety of product categories, which include express products, livestock, valuables, automobiles, perishables, pharmaceuticals, oversized cargo and general cargo that requires air freight carriage.

The cargo carrier offers QR Charter, utilising its most modern fleet of Boeing 747-8, Boeing 777 and Airbus A330 freighters. Its portfolio of distinctive products currently includes QR Pharma, QR Fresh, QR Live and QR Express offering efficiency and compliance in the handling of temperature-sensitive pharmaceutical and perishable cargo, transportation of live animals as well as time-critical shipments.

Doha, 25 June 2022 THE Embassy of Nepal and the Non-Resident ...
END_OF_DOCUMENT_TOKEN_TO_BE_REPLACED