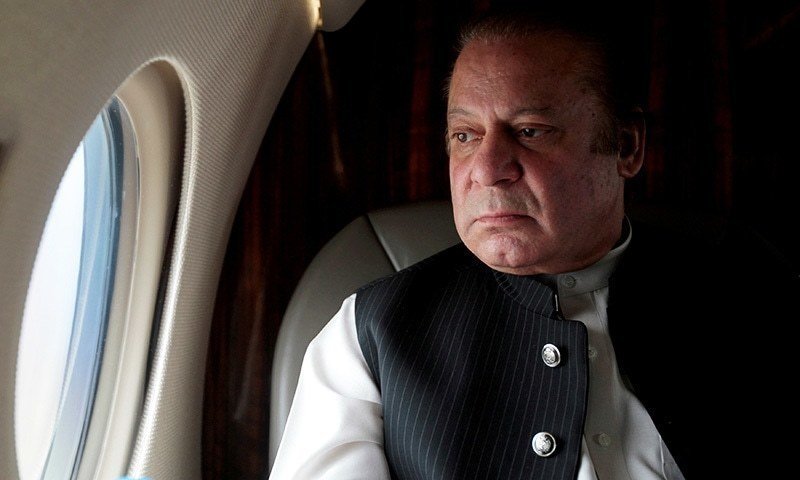 Prime Minister of Pakistan Mohammad Nawaz Sharif has stepped down immediately after disqualification as member of Pakistan Lower House on orders of Five Members bench of Supreme Court of Pakistan. He is found guilty not declaring Dubai based FZE Company among his declare assets at the time of contesting general elections in 2013 and on holding residence visa of United Arab Emirates.

This is third time that Nawaz Sharif is ousted as Prime Minister before completing his term. Last time, his democratically elected government was dismantled on 12th October 1999 in a coup by then Chief of Army Staff of Pakistan General Pervez Musharaf who later provided logistic and security support to US led invasion of Afghanistan in October 2001, post 9/11.

A five-member bench headed by Justice Asif Saeed Khan Khosa announced it’s judgment while hearing Panama Papers case at 1203 PM (Pakistan Time). Court also directed National Accountability Bureau (NAB), Pakistan’s main anti-corruption watchdog to file a case against Sharif and his children in an anti-corruption court within 6 weeks and that the trial should be completed in 6 months.

The Supreme Court also disqualified Finance Minister Ishaq Dar, a top leader of the ruling PML-N and retired Captain Mohammad Safdar, son-in-law of Nawaz Sharif from their seats in Parliament.

State Information Minister Marriyum Aurangzeb at a press conference after the verdict said, “Nawaz does not need a chair, he is a reality. That day is not far, when he will be chosen for the fourth time”

Aurangzeb added: “Some decisions happen in court, others in peoples courts. We may have lost one decision… which I am not surprised about but am saddened.”

“PML-N is Pakistan’s biggest political party. It has the higest number of political workers. And history is a witness that whenever Nawaz Sharif was removed unjustly, the people of Pakistan brought him back to parliament with a greater majority.”

She also said that the party will announce its plan after looking at the decision in detail.

Senior lawyer Asma Jehangir said the court’s decision should be accepted but that there is room for criticism.
“After this decision, a lot of cracks have emerged which will keep the judiciary on its feet for a very long time,” Jehangir said to Geo News. “This is a unique decision. It has had a unique procedure. In courts it happens that there is a set pattern but the way this case has happened is not normal.”

Earlier on April 20, a five-member bench comprising the same members had delivered a three-two provisional judgment in the case against Prime Minister Nawaz Sharif and his family over charges of having overseas properties through corruption and money laundering.

Justice Khosa and Justice Gulzar Ahmed had declared the prime minister be disqualified under Article 62(1)(f) of the Constitution, while three judges – Justice Ejaz Afzal Khan, Justice Sheikh Azmat Saeed and Justice Ijazul Ahsan had decided to constitute a joint investigation team (JIT) to further probe the financial affairs of the Sharif family.

Former president of Supreme Court Bar Association (SCBA), Barrister Ali Zafar said: “I fail to understand what is happening. I am seeing this for the first time.”

He, however, expected that the matter could go to trial court.

A three-judge bench, headed by Justice Ejaz Afzal Khan, after hearing the arguments on the JIT report had reserved the judgment on July 21st.

The bench had stated surely they would look into the matter of disqualification of the respondents.

However, Justice Ejaz Afzal observed that concealment of assets fell under Section 12(2)(f) of Representation of People Act, 1976, which was jurisdiction of the Election Commission of Pakistan.

A senior counsel, on condition of anonymity, said: “What the case was and in what direction the court has taken it is very strange?”

“This happens when the things are happening not in accordance with the law and constitution. The fate of this case would be similar to Zulfikar Ali Bhutto’s case,” he claimed.

The majority judgment rendered by Justice Ejaz Afzal, Justice Sheikh Azmat and Justice Ijazul Ahsan had directed for constitution of the JIT.

They had requested Chief Justice of Pakistan Mian Saqib Nisar to constitute a special bench to ensure implementation of this judgment so that the investigation into the allegations may not be left in a blind alley.

Justice Azmat in his judgment in Panama Papers case has given finding; “Article 62(1)(f) of the Constitution cannot be permitted to be used as a tool for political engineering by this court nor should this court arrogation unto itself the power to vet candidates on moral grounds …”

A similar kind of observation was give by Justice Ejaz.

On the other hand, the minority judgment delivered by Justice Asif Saeed Khan Khosa and Justice Gulzar Ahmed stated: “Mian Muhammad Nawaz Sharif has not been ‘Honest’ and ‘Ameen’ in terms of Article 62(1)(f) of the Constitution and thus rendered himself disqualified from holding the office of a member of National Assembly of Pakistan and ceasing to be the prime minister of Pakistan.

“The respondent No 1 (PM) is not ‘Sadiq’ and ‘Ameen’ and does not deserve to be the member of National Assembly. The ECP is directed to issue a notification of disqualification of Mian Muhammad Nawaz Sharif from being a member of Parliament with effect from the date of announcement of the present judgment.”

The JI in its earlier petition had requested the Supreme Court to direct the investigating agencies to probe all persons whose names appeared in Panama Papers case. Later, it changed its request and demanded disqualification of the prime minister.

Sheikh Rasheed has urged the top court to form a commission as it had constituted in the case of Memogate scandal.

The three-member bench had constituted six-member joint investigation team comprising FIA Additional Director General (Immigration) Wajid Zia, Brig Muhammad Nauman Saeed from the ISI, Brig Kamran Khurshid from the MI, Irfan Naeem Mangi from the NAB, Amer Aziz from the SBP, and Bilal Rasool from the SECP. Wajid Zia was made head of the team.

The JIT was tasked to find answer of 13 questions; how did Gulf Steel Mill come into being; what led to its sale; what happened to its liabilities; where did its sale proceeds end up; how did they reach Jeddah, Qatar and the UK; whether respondents No 7 and 8 in view of their tender ages had the means in the early 1990s to possess and purchase the flats; and whether sudden appearance of the letters of Hamad bin Jassim bin Jaber Al-Thani is a myth or a reality.

The other questions were: how bearer shares crystallised into the flats; who, in fact, is the real and beneficial owner of M/s Nielsen Enterprises Limited and Nescoll Limited, how did Hill Metal Establishment come into existence; where did the money for Flagship Investment Limited and other companies set up/taken over by respondent No 8 come from, and where did the working capital for such companies come from and where do the huge sums running into millions gifted by respondent No 7 to respondent No 1 drop in from.

It had found significant gap/disparity among the known and declared sources of income and wealth accumulated by Prime Minister Nawaz Sharif, Mariam Safdar, Hussain Nawaz and Hassan Nawaz.

It had referred sections of the National Accountability Ordinance (NAO) 1999 and the Qanun-e-Shahadat, 1984 to proceedings against the Sharif family.

The report noted that all the respondents failed to produce the requisite information confirming “known sources of income” in prima facie tantamount to not being able to justify assets and the means of income.

These companies were mainly used for inflow of funds into UK-based companies, which not only acquired expensive properties in the UK from such funds but also revolved these funds among their companies of the UK, the KSA, the UAE and Pakistan.

The prime minister and Hussain Nawaz have been found to be recipients of movement of these funds into Pakistan as gift/loans whose purpose/reason have not justified by them before the JIT.

Needless to say, these UK companies were loss-making entities which heavily engaged in revolving funds vis-à-vis creating a smoke screen.

The expensive properties of the UK were due to the business operations of these UK companies.