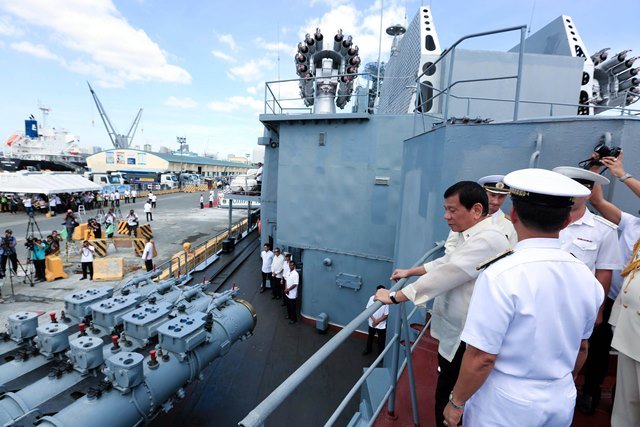 Philippines President Rodrigo Duterte visited today, Friday the Russian large anti-submarine ship, which is anchored in the country this week for a goodwill visit.

President of Philippines arrived at Pier 15, Port Area in Manila at 12:58 p.m.(local time) and was accorded foyer honors by the Russian Navy.

President Duterte first went to the Torpedo Area then proceeded to the bow of the ship.

He signed on the Guest Book in Ward Room. President Duterte inspected 1 Ka-27 helicopter located at the helicopter deck.

The 162-meter long large anti-submarine ship, which is under the Pacific Fleet of the Russian Navy, arrived at the Port of Manila on January 3 for four days tour.

The Palace sees the goodwill visit to contribute to the strengthening of friendship with the Philippine Navy.
“It is also an indication that our maritime cooperation can further be enhanced to enable diplomacy and camaraderie,” said Presidential Spokesperson Ernesto Abella in a press briefing on Thursday.