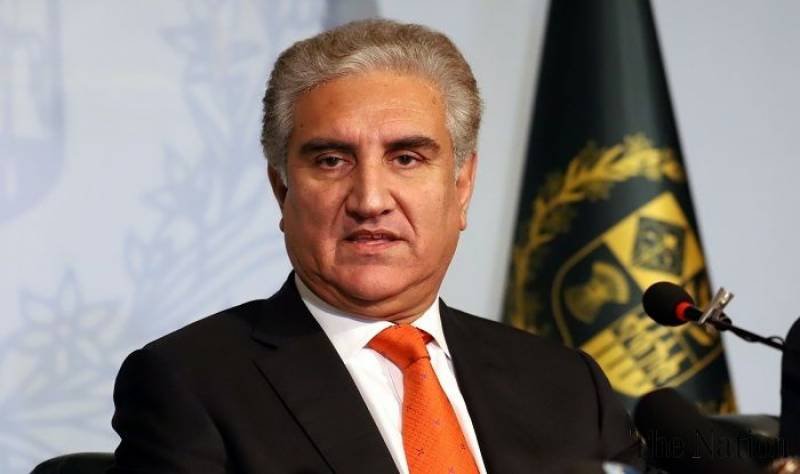 Pakistan made it clear to India that it would not replace Foreign Minister Shah Mehmood Qureshi on the whim of New Delhi, officials said.

Senior officials at foreign ministry told The Nation that India was contacted through diplomatic channels after some controversial tweets from the Indian ministers and urged not to ‘cross limits’.

One official said: “Telling us to remove or appoint a minister is not India’s job. They are issuing strange statements and we have pointed that out.” He said that the Indian side had been asked not to create controversies amid Pakistan’s peace efforts as ‘we will not replace the FM or act against any minister on anyone’s whim.”

Another official said that Pakistan had also highlighted the negative remarks about Kartarpur corridor by the Indian media and extremist elements.

On Sunday, Foreign Minister Shah Mehmood Qureshi said that Pakistan decided to open the Kartarpura corridor in view of longstanding desire of the Sikh community. “We have taken this historic initiative in good faith and will carry it forward in the same spirit,” he said.

The minister said that dragging his comment towards ‘Sikh sentiments’ was a ‘deliberate attempt to misrepresent and mislead’. He said that what ‘I said was strictly with reference to bilateral interaction with the Indian government’.

Qureshi added that ‘we have deep respect for Sikh sentiments and no amount of distortions or controversies would change it’.

Earlier, Indian Union Minister Harsimrat Kaur Badal urged Prime Minister Imran Khan to take action against Qureshi for hurting sentiments of Sikhs. She is the second Indian minister after Sushma Swaraj to hit out at Qureshi. “I urge Pak PM Imran Khan to take action against his minister (Qureshi) for hurting sentiments of Sikhs and peace efforts by equating attendance at the function at Sri Kartarpur Sahib with trapping India by bowling a googly. Nothing can be more disgusting than this,” Badal said in a series of tweets.

She added: “Your (PM Imran Khan’s) commitment to peace shouldn’t be a hollow promise. Please walk the talk and take action against Mehmood Qureshi immediately for politicising religious issue to assuage hurt feelings of Sikhs.”

Her words came after Qureshi claimed that Prime Minister Khan bowled a ‘googly’ to ensure the Indian government’s presence at groundbreaking ceremony of the landmark Kartarpur corridor on November 28. “Imran delivered a googly and India sent two ministers to Pakistan,” FM Qureshi had said.

Later, Indian External Affairs Minister Sushma Swaraj ruled out the possibility of resumption of bilateral talks with Pakistan. She announced that Indian Prime Minister Narendra Modi will not travel to Pakistan for the proposed South Asian Association for Regional Cooperation summit – the dates for which are yet to be finalised. “Opening Kartarpur corridor doesn’t mean that the bilateral dialogue with Pakistan will start,” she contended.

Swaraj also made a harsh tweet: “Mr Foreign Minister of Pakistan – Your ‘googly’ remarks in a dramatic manner has exposed none but you. This shows that you have no respect for Sikh sentiments. You only play ‘googlies’. Let me explain to you that we were not trapped by your ‘googlies’. Our 2 Sikh ministers went to Kartarpur Sahib to offer prayers in the Holy Gurudwara.”

The Foreign Office reaffirmed ‘that the initiative to open this corridor has been taken by the government of Pakistan solely in deference to the longstanding wishes of our Sikh brethren, and especially in the wake of the forthcoming 550th birth anniversary of Baba Guru Nanak Dev’.

FO spokesperson Dr Faisal said that Indian media’s coverage attributing the opening of the visa-free corridor to any other motive was purely malicious.

Last week, Prime Minister Imran Khan warned India those one-sided efforts for peace ‘cannot bear any fruit.’ He complained that India was not responding to Pakistan’s efforts for talks aimed at the regional peace. “Indian response has so far been disappointing,” he regretted, adding that he had approached India from day one in office and assured Pakistan will take two steps ‘if New Delhi takes one’ to improve ties.

The nuclear armed neighbours have fought 3 wars since gaining independence from the British rule in 1947.