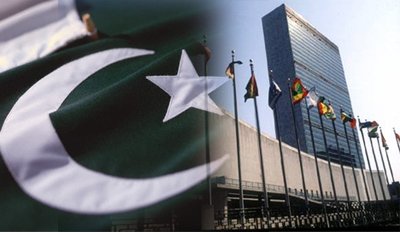 Pakistan has underscored the need for measures to prevent non-state actors and terrorist groups from obtaining and using chemical and biological weapons, while sharing international community’s concern over the danger of those arms falling into the wrong hands.

In that regard, Ambassador Janjua, , who is Pakistan’s permanent representative to the U.N. in Geneva, pointed out that Pakistan had supported the Russian proposal for a Bio-Chemical Terrorism Convention.

The Pakistani envoy, who was participating in a debate on weapons of mass destruction, said Pakistan condemns the use of chemical weapons by anyone, anywhere, and welcomed milestones that had been achieved in the destruction of Syrian and Libyan chemical weapons. “We remain committed to the full and effective implementation of the Biological and Toxin Weapons Convention (BTWC),’ she said. “We attach high priority to the Convention’s provisions relating to international cooperation and assistance as well as peaceful uses of chemical technology.”

Pakistan, Ambassador Janjua said, had instituted comprehensive legislative, regulatory and administrative measures including Codes of Conduct to regulate life sciences in Pakistan, to enhance bio-safety and bio-security regulations, and to strengthen our export controls on biological agents and toxins. “Our robust export control regime imbibes the best international standards.”

Pakistan also reaffirmed its commitment to the objectives of the Chemical Weapons Convention and continues to participate in the work of the OPCW (Organisation for the Prohibition of Chemical Weapons).

Pakistan also continues to conduct basic and advanced regional and international assistance and protection courses, she said. “As a mainstream partner in the global non-proliferation regime, Pakistan has elaborated and implemented an export control regime that is comprehensive and fully harmonized with international standards,”Ambassador Janjua said. “Our comprehensive export control regime and its effective implementation has been recognized and appreciated by our partners.”