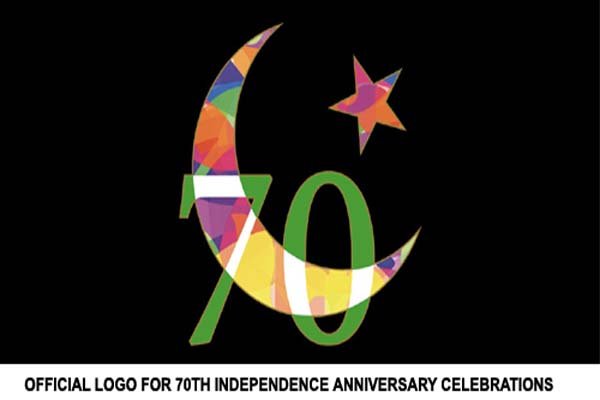 The Official Logo of the 70 years of independence celebrations was released here today on Sunday.

The Logo had been launched at a ceremony held at Pakistan National Council of the Arts on Friday.

The ceremony was attended by Minister for Railways Saad Rafique, Minister of State for Information, Broadcasting and National Heritage, Marriyum Aurangzeb and Prime Minister’s Adviser on National History and Literary Division, Irfan Siddiqui.

In her speech during the launching ceremony, Minister of State for Information, Broadcasting and National Heritage Marriyum Aurangzeb informed the audience that 200 artists had submitted 400 entries of logo designs and the competition was won by third year student of National University and Science and Technology, Saba Zaman, who will be awarded Rs 500,000 by the Government of Pakistan.

She said that the objectives of the independence celebrations included creation of awareness among the new generation about the sacrifices given by our forefathers for achieving independence, revival of the original narrative of Pakistan and ensuring connectivity of the younger generation with the culture and heritage of the country, in conformity with the vision of the Prime Minister.

The MOS requested all media houses to display this logo during the celebrations of the 70 years of independence.

She said that the Prime Minister had also invited private sector to join these celebrations as all have contributed in the progress of the country.

20 January 2022 By Ashraf Siddiqui More than 7,000 books of different ...
END_OF_DOCUMENT_TOKEN_TO_BE_REPLACED