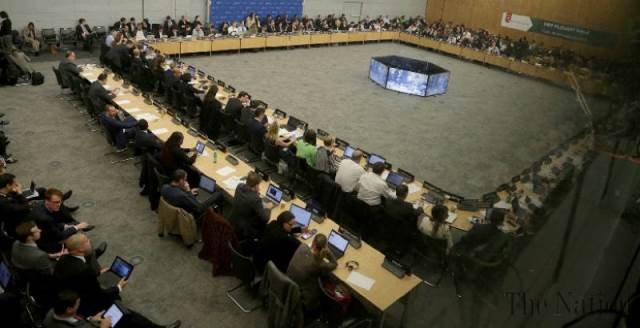 In a statement Financial Action Task Force (FATF) spokesperson Alexander Daniela has denied that Pakistan had been included in the grey-list.While speaking to a private media channel Daniela that the final decision will come once the matter has been reviewed, currently the meeting is underway.

On the other hand Pakistan Foreign Office spokesperson said, “Pakistan has serious concerns over the motion moved by US and UK at the Financial Action Task Force to put the country on the grey list.”Spokesperson from FO also said that reports from the FATF and the International Cooperation Review Group (ICRG) are still awaited.

Earlier Indian media started spreading false news that Pakistan had been placed on the Grey List, which was refuted by Pakistan Foreign Office and FATF spokesperson.

Paris,  23 February 2018 – The Financial Action Task Force (FATF) is the global standard setting body for anti-money laundering and combating the financing of terrorism (AML/CFT). In order to protect the international financial system from money laundering and financing of terrorism (ML/FT) risks and to encourage greater compliance with the AML/CFT standards, the FATF identified jurisdictions that have strategic deficiencies and works with them to address those deficiencies that pose a risk to the international financial system.

Jurisdictions subject to a FATF call on its members and other jurisdictions to apply counter-measures to protect the international financial system from the on-going and substantial money laundering and terrorist financing (ML/FT) risks emanating from the DPRK.

In June 2016, the FATF welcomed Iran’s high-level political commitment to address its strategic AML/CFT deficiencies, and its decision to seek technical assistance in the implementation of the Action Plan. Given that Iran provided that political commitment and the relevant steps it has taken, the FATF decided in November 2017 to continue the suspension of counter-measures.

Since November 2017, Iran has established a cash declaration regime and introduced draft amendments to its AML and CFT laws. However, Iran’s action plan has now expired with a majority of the action items remaining incomplete. Iran should fully address its remaining action items, including by: (1) adequately criminalising terrorist financing, including by removing the exemption for designated groups “attempting to end foreign occupation, colonialism and racism”; (2) identifying and freezing terrorist assets in line with the relevant United Nations Security Council resolutions; (3) ensuring an adequate and enforceable customer due diligence regime; (4) ensuring the full independence of the Financial Intelligence Unit and requiring the submission of STRs for attempted transactions; (5) demonstrating how authorities are identifying and sanctioning unlicensed money/value transfer service providers; (6) ratifying and implementing the Palermo and TF Conventions and clarifying the capability to provide mutual legal assistance; (7) ensuring that financial institutions verify that wire transfers contain complete originator and beneficiary information; (8) establishing a broader range of penalties for violations of the ML offense; and (9) ensuring adequate legislation and procedures to provide for confiscation of property of corresponding value.

Given that Iran has draft legislation currently before Parliament, the FATF decided at its meeting this week to continue the suspension of counter-measures. Depending upon Iran’s progress in completing its action plan, the FATF will take further steps in June 2018. The FATF urgently expects Iran to proceed swiftly in the reform path to ensure that it addresses all of the remaining items in its Action Plan by completing and implementing the necessary AML/CFT reforms, in particular passing the necessary legislation.

Iran will remain on the FATF Public Statement until the full Action Plan has been completed. Until Iran implements the measures required to address the deficiencies identified in the Action Plan, the FATF will remain concerned with the terrorist financing risk emanating from Iran and the threat this poses to the international financial system. The FATF, therefore, calls on its members and urges all jurisdictions to continue to advise their financial institutions to apply enhanced due diligence to business relationships and transactions with natural and legal persons from Iran, consistent with FATF Recommendation 19.

Paris, 23 February 2018, the second FATF Plenary meeting under the Presidency of Mr. Santiago Otamendi of Argentina took place in Paris 21-23 February 2018. The main issues dealt with by this Plenary were: