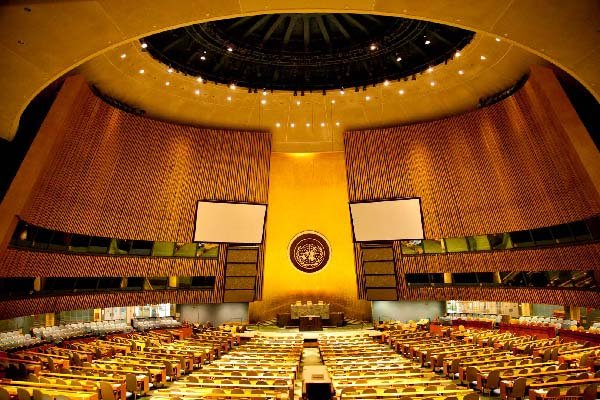 Reaffirming its commitment to women’s cause, Pakistan has drawn international community’s attention to the sufferings of the Kashmiri women in Indian Occupied Kashmir during a debate on women’s issues in a committee of the U.N. General Assembly.

“In Indian occupied Kashmir, thousands of women have falling victims to brutal oppression and occupation,” Pakistani delegate Shazra Mansab Ali told the 193-member Assembly’s Third Committee, which deals with social, humanitarian and cultural issues. “Countless others have suffered rape and sexual abuse, the worst and the most traumatic form of violence,” she said while speaking in the debate on Advancement of women. “Armed conflict and illegal occupation, further accentuates the plight of women,” the Pakistani delegate said.

Three quarters of the Syrian refugee population are women and children, she pointed out, and described the plight of Palestinian women “grave”.
The Pakistani delegate said all forms of discrimination must be eliminated in order to achieve the Sustainable Development Goals. Inequality and discrimination remained a reality for millions of women and girls, she said. Shazra Ali said Pakistan’s Parliament recently passed a comprehensive legislation against the practice of “honour killing”. The government, she added, would take all measures to ensure its effective implementation.

“The Pakistan Vision 2025, the forward-looking and development-oriented action-plan for long-term economic development in (Pakistan), also fully integrates gender issues within its fold,” she said. “As a member of parliament myself, I can attest to the active role being played by women in positions of leadership and responsibility in Pakistan.”

Her remarks about the plight of Kashmiri women evoked a right of reply from an Indian representative, who alleged that innocent women in the disputed state had suffered from terrorist acts perpetrated by proxies of Pakistan.

In response, Pakistan’s representative said no amount of obfuscation could hide India’s human rights violations in Jammu-Kashmir. As a result of India’s military actions in that territory, more than 90,000 innocent Kashmiris had died. That dispute must be resolved in accordance with United Nations resolutions, he said, emphasizing that Pakistan would welcome meaningful dialogue with India in that endeavour.