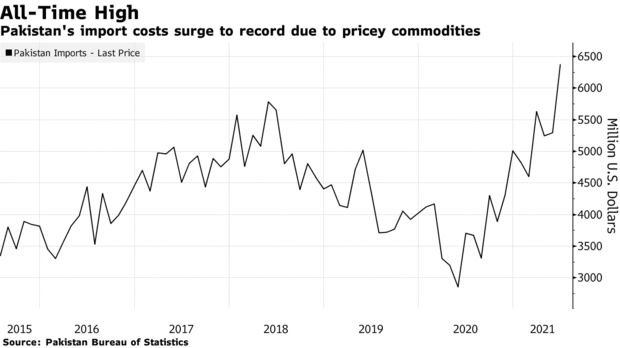 Cash-strapped Pakistan’s bet that liquefied natural gas prices would go down has failed, forcing the South Asian nation to pay more than ever for the power plant fuel or risk blackouts.

Pakistan LNG this week bought four cargoes for September delivery at around $15 per million British thermal units, the highest since the nation began imports in 2015, according to people with knowledge of the matter. The importer scrapped a tender for September cargoes that closed earlier this month in a gamble that prices would fall.

Pakistan’s power generators will be the main consumers of the latest cargoes, without which there was a risk that the nation wouldn’t have enough electricity, according to the people, who requested anonymity to discuss private details. The high costs are also a strain on the budget, with surging energy and commodity prices pushing import costs to a record high in June.

The price hikes have come amid a global supply crunch of natural gas that has sent rates from the U.S. to Europe surging as importers compete for a finite amount of readily available fuel. Dutch gas, the benchmark for Europe, is trading at a record high as nations in the region struggle to refill rock-bottom inventories.

The high prices are a blow for Pakistan, which along with other developing nations built LNG import strategies on the premise that the fuel would be abundant and cheap for the foreseeable future, as it has for the past several years. That changed this year, and the current spot price for Asian LNG is trading roughly 67% above the 10-year average, according to Bloomberg calculations.

While domestic consumers are currently protected from the turbulent imported gas prices, the government in Islamabad is considering changing some of those regulations to pass on some of the added cost.

The energy ministry didn’t immediately respond to a request for comment.