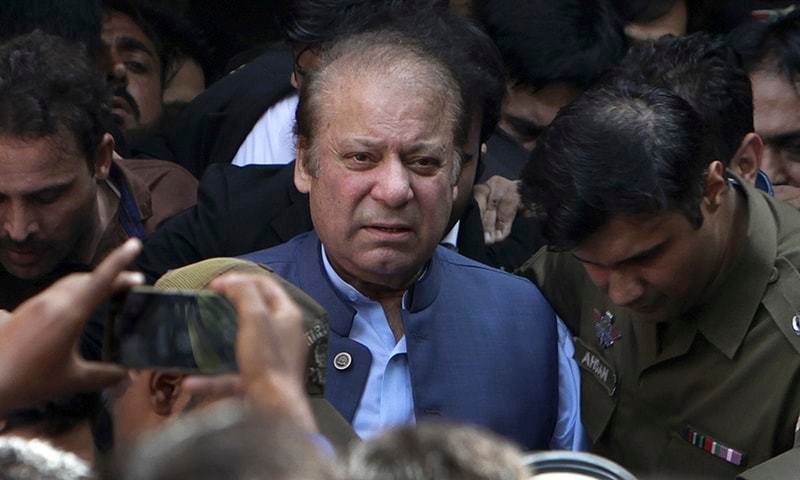 The Lahore High Court on Saturday allowed former premier Nawaz Sharif to travel abroad for four weeks for medical treatment, saying the duration could be extended based on medical reports.

In a blow to the government, which had placed a condition of indemnity bonds for Nawaz’s travel, the court ordered the federal government to remove his name from the Exit Control List (ECL) without any conditions.

A two-judge bench, comprising Justice Ali Baqar Najafi and Justice Sardar Ahmad Naeem, started hearing the petition at 11am and after multiple breaks and back and forth, delivered the verdict close to 6pm.

In the court-approved undertaking, Nawaz assured that he would return “within four weeks” ─ a time frame which was missing in the initial handwritten undertaking.

“Mian Mohammad Nawaz Sharif is granted one time permission to travel abroad as interim arrangement for four weeks and will return when certified by doctors that he has regained his health and is fit to return back to Pakistan,” read the court order.

Nawaz’s brother, who appeared in court, hailed the decision, saying the prayers of his mother, the nation and supporters have been granted. He signed an undertaking which stated he would “ensure return” of his brother “within four weeks or on certification by doctors that he has regained his health and is fit to return back to Pakistan”.

“I further undertake to provide/send the periodical medical report of the doctor duly notarised by the embassy to the registrar of this court,” said the document signed by Shehbaz.

According to the verdict, the court formulated five law points and admitted the petition for regular hearing which will be fixed in the third week of January 2020.

The law points are as follows:

Attorney General Anwar Mansoor Khan pointed out that this is an interim order. When asked about appealing the verdict, he said once the detailed order is available, the cabinet would decide the matter.

The attorney general said that the interior ministry is the authority to remove the name from the ECL, however, there are examples from the past in which a person can fly after showing an attested copy of the court order to immigration officials.

Following the court orders, Shehbaz Sharif said that an air ambulance will take Nawaz — who has been diagnosed with an immune system disorder — to London, most likely tomorrow.

The PML-N president said that he will be accompanying his elder brother.

“Initially, we are going to London but we will move to any other country as per doctors’ advice,” he said, adding that if needed, he will stay abroad with his brother.

The PML-N president added that Maryam Nawaz Sharif will remain in the country.

Meanwhile, party spokesperson Marriyum Aurangzeb in a statement said that arrangements were being made on emergency basis to shift Nawaz Sharif abroad for medical treatment.