Over Half Million Tourists From Gulf Countries Expected to Spend Summer in Uzungol, Turkey 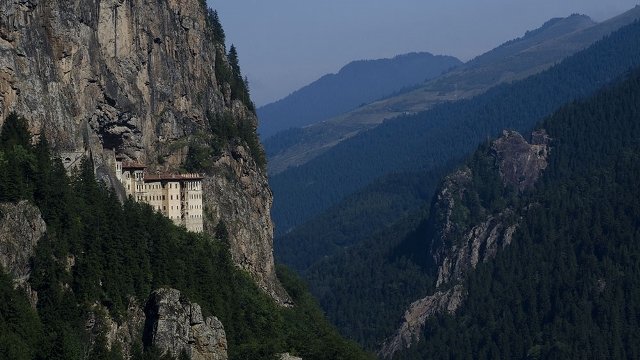 Mahmoud al-Abbasi, a visitor from the Saudi city of Medina, looks relaxed as he sits facing the picturesque lake in Uzungol, a mountain village 100km southeast of Trabzon.

“It feels like home and it is relief from the weather in Saudi,” he says of the village, exhaling the smoke from a water pipe. “The rain is amazing.”

Abbasi is part of a wave of more than half a million Gulf tourists expected to descend on the slopes and valleys of Turkey’s eastern Black Sea region by summer’s end, despite the ongoing crisis pitting Gulf quartet Saudi Arabia, the United Arab Emirates, Egypt and Bahrain against Qatar, which is backed by Turkey.

Ankara recently made clear its support for Qatar by taking part in a major joint military exercise with Qatari forces and sending troops to a Turkish military base in Doha. Turkish President Recep Tayyip Erdogan has also sought to push for a negotiated solution by shuttling between Gulf leaders in July when he met various heads of state.

Abbasi, who would like to return to Uzungol in winter to experience the snow, says the current political climate is of little concern to him. “But I hope it can be solved soon,” he says.

The dispute seems to have had little effect on the eastern Black Sea’s now-booming tourism industry. In July, eight cities in Saudi Arabia launched direct flights to Trabzon, the regional hub, to meet demand from Saudi tourists. The UAE and Kuwait also offer direct flights, bypassing the need for tourists to travel through airports in Istanbul, where an attack by the Islamic State of Iraq and the Levant (ISIL, also known as ISIS) killed 45 people in June 2016.

The throngs of Arab tourists are a boon to a region that, in the past, was more focused on contending with mass migration to Istanbul, Ankara and Izmir in the west. Today, Gulf tourists are welcomed with open arms; their holidaying was worth more than $1.5bn to the local economy last year. Tour operators say that because Gulf visitors generally travel in groups of extended families and look for packages that include airport transfers, accommodation and local tours, they spend more than visitors from other parts of the world.

“Every year it has been getting busier and busier in June, July and August,” says Sumeyah Salah, a receptionist at the Royal Uzungol Hotel, which opened in 2015 and charges from $250 a night. “Around 80 percent of our summer customers come from Gulf countries, and Saudi tourists make up the majority.”

In the first five months of this year, more than 22,000 Arab tourists visited Uzungol, a village with a permanent residential population of fewer than 2,000 people, according to the Trabzon Chamber of Commerce. More than 70 hotels and apartments catering to arange of budgets have sprung up in the village in less than a decade.

It is a region that’s easy to fall for. Above Uzungol in lush, green mountains rising two thousand metres above sea level, the spectacular sight of a paraglider slowly making his way down into the valley catches people’s eyes. At any of a number of restaurants, fish for visitors’ tables can be chosen from the adjacent outdoor ponds.

Locals have worked hard to draw tourists to an idyllic part of Turkey with a culture similar to the Arab world’s. Arabic-language road signage and language courses have become commonplace in Trabzon. Nineteen new hotel projects were launched over the past 18 months in Trabzon alone, according to the Hoteliers Association of Turkey; and across the eastern Black Sea, seven $25m hotel resorts are set to be built specifically for the Arab tourist trade. A 2,600-km new highway dubbed the Green Road and built – in the words of a regional development authority – to attract Gulf tourists, is set to open next year.

But not everyone is happy. Conservationists say the Green Road, a project of the state-run Eastern Black Sea Regional Development Plan, will inflict untold damage to fauna and disrupt shepherds’ access to mountain pastures.

The hotel association has warned that the growth of accommodation construction may result in hotel rooms lying empty in the months and years to come because the local tourist season is largely limited to summer months. Arab tourists buying apartments in Trabzon’s city centre are thought to have been responsible for driving up housing prices.

And for local businesses specialising in serving Gulf tourists, the spectre of recent events in the peninsula hangs in the air. “It’s impossible to ignore the crisis,” says Mustafa Ahmad, who is from Syria and works as a translator for Vazelon Tours, a major Trabzon-based operator that caters to around 20,000 Arab tourists each year.

“There are less this year by about 7,000 people compared with 2016, probably because of the issues between the Gulf countries,” he says. “But it is not an issue tourists who have already come here are worried about. It’s up to God, but we think the situation will change soon. The Arab countries are brothers, in the end.”

At Trabzon airport’s departures terminal, a constant flow of Arabic-speaking couples and groups stream indoors towards check-in desks, bound for any of several Gulf destinations. Abdullah Abdelhamid, from the Jordanian capital Amman, had never been to the region before, though he is adamant he will return.

“It’s amazing. The green scenery, the quiet atmosphere, and it is not hot here,” he says from a seat in the departures lounge. He and his wife are among a tour group of 13 Jordanians who just returned from visiting the Sumela monastery high in the Pontic mountains.

Jordan has also been drawn into the crisis, and in June downgraded diplomatic ties with Qatar, expelled Doha’s ambassador and closed Al Jazeera’s offices in Jordan.

“I’m not here to talk about politics; I’m here to enjoy myself,” Abdelhamid says. “But I don’t see any problem coming back here.”