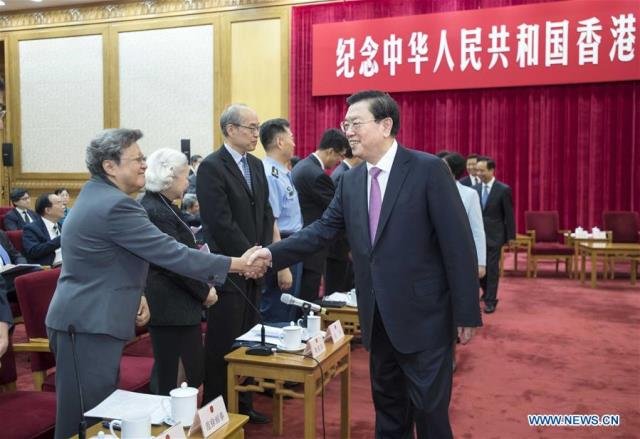 Addressing the symposium, which was held at the Great Hall of the People in Beijing, top legislator Zhang Dejiang called for comprehensive and precise implementation of the principle of “one country, two systems” and the Basic Law.

Zhang, chairman of the Standing Committee of the National People’s Congress (NPC), called the HKSAR Basic Law an extraordinary creation in a great era, which embodies the common will of all Chinese including Hong Kong compatriots and has demonstrated powerful vitality.

The Basic Law is a sound law which accords the actual conditions of the nation and the HKSAR and is able to provide a fundamental guarantee for the great cause of “one country, two systems” and withstand the test of practice, Zhang said.

The practice of the Basic Law over the past 20 years shows the fundamental purposes of safeguarding national sovereignty, security and development interests as well as maintaining Hong Kong’s long-term prosperity and stability must be adhered to in order to advance the cause of “one country, two systems,” Zhang noted.

HKSAR Chief Executive Leung Chun-ying said at the symposium that the principle of “one country, two systems” and the Basic Law are the best constitutional arrangements for both the HKSAR and the country.

With the combined advantages of “one country, two systems”, Hong Kong can participate in the country’s major development strategies including the National 13th Five-Year Plan and the Belt and Road Initiative, while serving as a “super-connector” between the mainland and the rest of the world at the same time, Leung said.

The coordinated and joint development of the HKSAR and the mainland would not only improve their overall competitiveness, but provide the world new experiences of cooperation between regions of different systems, thus enriching “one country, two systems,” he said.

Enacted in accordance with China’s Constitution, the Basic Law specifies the guidelines of “one country, two systems”, and “Hong Kong people administering Hong Kong” with a high degree of autonomy.

Elsie Leung, deputy director of the Commission for the HKSAR Basic Law of the NPC Standing Committee, said the implementation of the Basic Law has helped to realize the “one country, two systems” concept, stabilize the relationship between the central government and Hong Kong, and clarify the legal status of the HKSAR.

As the Basic Law was well received by Hong Kong citizens, a seamless and stable transition has been achieved with Hong Kong’s capitalist system and life styles unchanged, its legal system improved, judicial independence ensured, democracy developing step by step, and external affairs in sound shape, she said.

20 January 2022 By Ashraf Siddiqui More than 7,000 books of different ...
END_OF_DOCUMENT_TOKEN_TO_BE_REPLACED