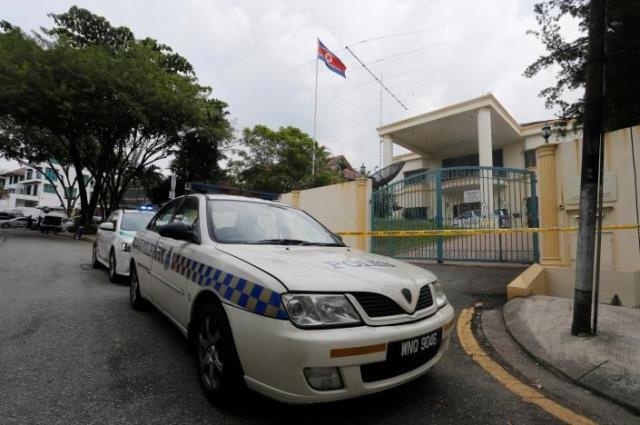 The United Nations called for calm between Malaysia and North Korea and urged them to settle their differences through “established diplomatic practice.”

The moves underscored the dramatic deterioration in ties with one of North Korea’s few friends outside China since the murder of North Korean leader Kim Jong Un’s estranged half-brother at Kuala Lumpur International Airport on Feb. 13.

Malaysia said the assassins used VX nerve agent, a chemical listed by the United Nations as a weapon of mass destruction.

Police have identified eight North Koreans wanted in connection with the murder, including two of the three believed to be hiding in the embassy – a senior North Korean diplomat and a state airline employee.

The only people charged so far are a Vietnamese woman and an Indonesian woman, accused of smearing the victim’s face with VX. He died within 20 minutes.

“In this period the diplomats and citizens of Malaysia may work and live normally under the same conditions and circumstances as before.”

Najib denounced the travel ban in a statement as an “abhorrent act” that was in “total disregard of all international law and diplomatic norms”.

He said he had instructed the police “to prevent all North Korean citizens in Malaysia from leaving the country until we are assured of the safety and security of all Malaysians in North Korea”.

Najib returned from Indonesia and held an emergency meeting of his National Security Council.

There was no statement after the meeting, but the prime minister addressed Malaysians’ concerns on social media.

“I understand the feelings and concerns of the family and friends of Malaysians held in North Korea. We assure that we are doing everything we can to make sure they come back to the country safely.”

Euan Graham, Director, International Security at the Lowy Institute in Sydney, called the latest events “a classic own goal of North Korea’s making”, triggered “by the most outrageous public murder that you can image, using a chemical weapon in a crowded international airport.

“You’d have to go back a long way for this kind of wholesale diplomatic meltdown.”

The Malaysian murder and the four ballistic missiles North Korea test-launched on Monday “creates a more supportive climate for even tougher rounds of sanctions and coercive measures” against Pyongyang, Graham added.

Before the murder, North Korea could count Malaysia as one of its strongest friends. But Malaysia has since stopped visa-free travel and on Monday it expelled North Korea’s ambassador for questioning the impartiality of the murder investigation.

Last week, Malaysia said it would investigate North Korea front companies after a Reuters report showed that Pyongyang’s spy agency was running an arms network in the country.

There are 11 Malaysians in North Korea, according to a Malaysian foreign ministry official, including three embassy staff, six family members, and two others.

Hundreds of North Koreans are believed to be in Malaysia, most of them students and workers. The focus, however, was on its embassy staff.

United Nations calls for calm between Malaysia and North Korea
Once strong ties between North Korea and Malaysia rapidly unravel
“We are trying to physically identify all the embassy staff who are here,” deputy home minister Nur Jazlan Mohamed told reporters outside the North Korean embassy.

He said staff would not be allowed to leave the embassy “until we are satisfied of their numbers and where they are”.

Speaking at a news conference in Kuala Lumpur on Tuesday, Malaysia’s police chief Khalid Abu Bakar said police would not raid the embassy building to get the three North Koreans sought in connection with the murder.

“We will wait for them to come out,” the police chief said. “We have got all the time.”

Aside from those three suspects, police have said four other wanted North Koreans left Malaysia in the hours after the murder.

The only North Korean suspect to be apprehended was deported on Friday, released due to insufficient evidence.

U.S. officials and South Korean intelligence suspect North Korean agents were behind the assassination of Kim Jong Nam, who had been living in Macau under China’s protection. He had spoken out publicly against his family’s dynastic rule of North Korea.

North Korea has refused to accept the dead man is leader Kim Jong Un’s half brother, and has suggested the victim died of a heart attack.

No next of kin have come forward to claim the body, but the Malaysian police chief said he was confident of obtaining DNA samples to formally identify the murdered man.