No One Can Stop Me From Declaring Martial Law, President Duterte 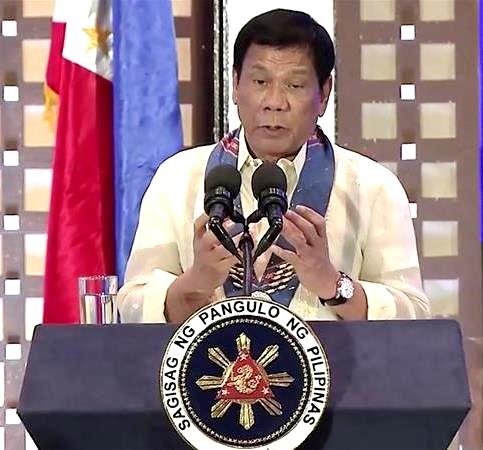 Philippine President Rodrigo Duterte has said he would consider declaring martial law if the drug problem deteriorates, adding “no one can stop” him from making such a decision.

“I have to protect the Filipino people. It is my duty. And I tell you now, if I have to declare martial law, I will declare it,” Duterte told a gathering of businessmen in his hometown of Davao on Saturday evening.

“I don’t care about the Supreme Court. No one can stop me,” he said. “The right to preserve one’s life and my nation … transcends everything else, even the limitations.”

Under the 1987 Constitution of the Philippines, the president can declare martial law up to 60 days “in case of invasion or rebellion.”

The constitution makes no mention of drug violence as a justification for declaring it. Congress and the Supreme Court also have the power to review any such declaration.

But Duterte said that his duty “to preserve the Filipino people, and the youth of this land” is sufficient to suspend the writ of habeas corpus.

“Not about invasion, insurrection. Not about danger. I will declare martial law to preserve my nation. Period,” he said.

It is not the first time that Duterte has openly discussed declaring martial. On Thursday he said the constitutional provision giving Congress and the Supreme Court power to review martial law declaration needed to be revised.

But he also said earlier in January that he had no plans of declaring martial law, saying it was “nonsense”, adding that it did not improve the lives of Filipinos, when it was declared in the past.

In 1972, then President Ferdinand Marcos declared martial law citing the threat of communist insurgency in the country.

In August of last year, Duterte was angered by the Chief Justice sent him a letter questioning his decision to release the names of judges accused of links to the illegal drug trade.

“If this will continue and if you will try to stop me, then fine. Would you rather I declare martial law?” Duterte was quoted as saying.

Duterte won the May 2016 presidential election largely on a platform of fighting the illegal drug trade.

As of mid-December, less than six months into his presidency, more than 6,000 people have been killed as part of that war on durgs. Dozens more have been reported killed since January 1, 2017.