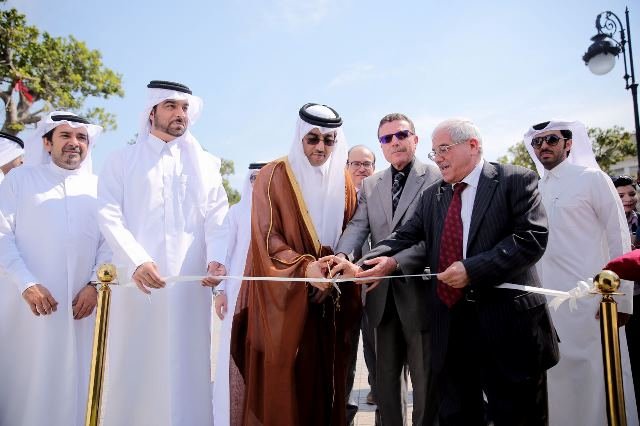 The National Human Rights Committee (NHRC) in collaboration with the Supreme Commission for Human Rights and Fundamental Freedoms, organized the Arabic Calligraphy Exhibition on “Human Rights in Islamic Culture” at Qatar embassy in Tunisia.

Present on the occasion were Dr. Ali Bin Samih Al Marri, Abdulaziz Mohamed Al Shaikh, Minister Delegate at the Embassy of the State of Qatar in Tunisia, Ahmed Adhoum, Minister of Religious Affairs, along with a number of intellectuals, artists and media representatives.

Dr. Ali Bin Samih Al Marri, Chairman of the National Committee for Human Rights said that this exhibition, which includes creative paintings of the Arabic calligraphy, Qur’anic verses and prophetic traditions that are directly related to the Universal Declaration of Human Rights and international human rights conventions.

He told that the Committee had held this exhibition last year at the United Nations in Geneva, during the session of the Human Rights Council, and also held in Paris, France, and had a good response and a good echo to all attendees.

Al-Marri said “The Islamic religion has taken care of human rights and called for respect for its dignity and freedoms.” His message was to consolidate the principles of justice and equality among all human beings and to end injustice, tyranny, racism and oppression.

He said religion Islam stress to live together between different religions, sects, races and races. The religious and ethnic minorities in the Islamic state have lived for more than 14 centuries. They enjoy safety and freedom in the practice of their rituals and rituals.

He pointed out that Islam embraces in its civilization the fine art and taste, and the wonderful heritage in the arts and architecture. This evidence is clear, and Islam also preserved the human heritage and heritage of the previous civilizations in the country that entered it to this day, believing that cultural and civilizational diversity is a gain for humanity, and its inheritance shall never be disfigured or destroyed.

Tawfiq Abu Derbala, Chairman of the Supreme Commission for Human Rights and Fundamental Freedoms said “We gather today to learn about human rights in the Islamic civilization, a link to our glorious past and what we have done in our present in the global system of human rights.

He said that this confirms that the religions, especially the Islamic religion honored the human rights and recognized him and give it. Stressing the start of the Arab Islamic countries of its shortcomings and in cooperation with all the countries that have fused in the global system of human rights, which formed the principles of the Universal Declaration of Human Rights.

Abu Darbala said “Perhaps we have left behind because of colonialism and our history of attacks, which made us expect ourselves, but then we got caught up and we are now at the same level of world and accept all these universal principles of our Islamic culture and what is stated in the Koran and the Prophet’s Hadith, Recognized by the Arab countries in their Islamic culture and found it in all the principles contained in the International Bill of Human Rights.

He said ‘ We are given in what we have and take in our present these rights are not only principles and goals, but faith, doctrine and application because the conflict with human rights is a conflict with the self.’

He said ‘ Islamic countries now are not late in the field of human rights, but we are and are influential with all countries of the world.’

The exhibition is held on the sidelines of the meetings of the 34th session of the Council of Arab Interior Ministers at the headquarters of the General Secretariat of the Council in Tunis.