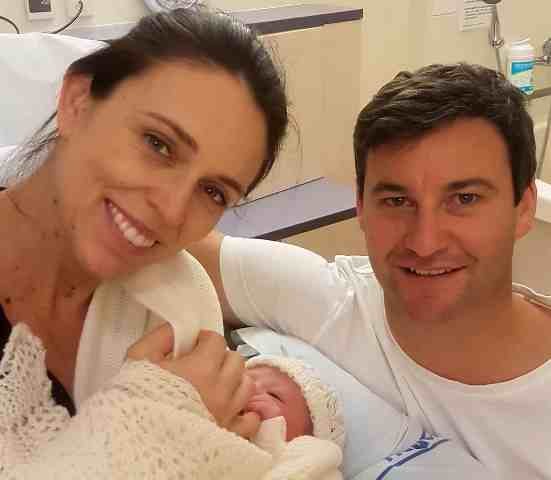 “Welcome to our village, wee one,” is how Jacinda Ardern announced the birth of her daughter to New Zealand, and the world.

The prime minister posted a photograph of her and partner Clarke Gayford cuddling their first child on her Facebook page late on Thursday afternoon (NZ time).

“Feeling very lucky to have a healthy baby girl that arrived at 4.45pm weighing 3.31kg (7.3lb). Thank you so much for your best wishes and your kindness. We’re all doing really well thanks to the wonderful team at Auckland City hospital.”

Ardern, 37, becomes only the second world leader to give birth while in office, the first being Pakistan’s Benazir Bhutto in 1990 – with whom, coincidentally, Ardern’s daughter shares a birthday.

Morgan Godfrey, a political commentator and writer remarked “Jacinda Ardern arrived at hospital in her own car, with Clarke driving. No crown limo or special ambulance. Her baby was delivered in a public hospital alongside everyone else’s. No private hospital. No extra special attention. New Zealand, remain your understated self.”

He added: “Three cheers for the public health system, too.”

Ardern intends to take six weeks’ maternity leave before returning to work, with Gayford, a television presenter and “first bloke”, remaining at home. Gayford had himself announced that “our little girl has finally arrived” on Twitter, adding that both mother and baby were “healthy and happy”.

Doha, 25 June 2022 THE Embassy of Nepal and the Non-Resident ...
END_OF_DOCUMENT_TOKEN_TO_BE_REPLACED