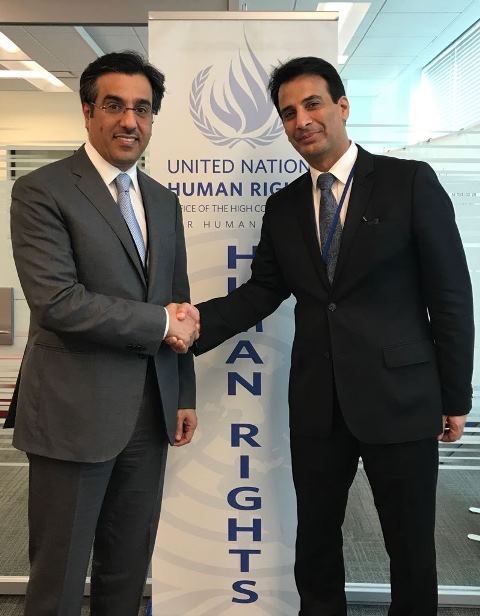 Dr. Ali bin Smaikh al-Marri, Chairman of  National Human Rights Committee (NHRC) has renewed calls for the urgent dispatch of an international technical mission to visit Qatar and the siege countries to examine grave human rights violations caused by Saudi Arabia, the UAE and Bahrain against nationals and residents of Qatar, and citizens of the three countries themselves.

He also urged direct meetings with the victims to listen to their complaints, and document their psychological, material and moral damage they suffered.

This came during a meeting Dr. Al-Marri held with Dr. Craig Mokhiber, Head of the Office of the High Commissioner for Human Rights in New York, and Deputy Secretary-General for Human Rights of the United Nations, within the framework of his current visit to the United States to mobilise support with regard to human rights violations caused by the siege.

During the meeting, they discussed the position of the High Commissioner for Human Rights on the Gulf crisis and the international mechanisms of human rights in the face of violations resulting from the siege.

Dr. Ali Samekh Al-Marri gave Dr. Mokhiber a detailed explanation of the latest developments and the statistics regarding the violations documented since the beginning of the siege on the Qatari people and residents of Qatar.

He also briefed the UN official on the actions taken by the National Human Rights Committee at regional and international levels to address these violations, and the results of his discussions with international human rights organisations, the Office of the High Commissioner in Geneva and the United Nations Special Procedures Office.

He noted that the NHRC had received 3,346 complaints as a result of the siege imposed on Qatar, including 620 requests by families affected by the siege.

Chairman NHRC had previously discussed with the High Commissioner for Human Rights violations by the siege countries, especially those related to health and education, family reunification and the practice of religious rights.