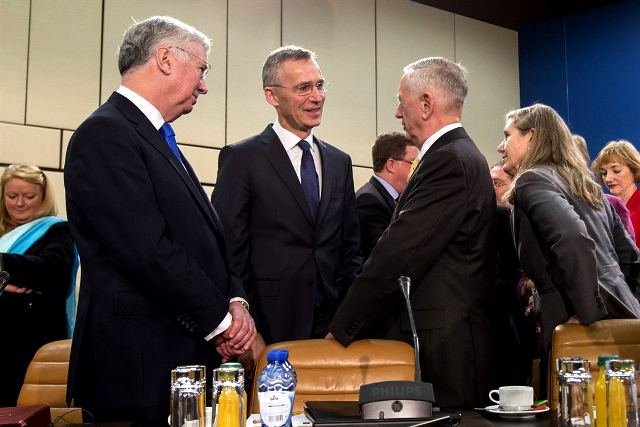 Jens Stoltenberg, Secretary General NATO today announced after meeting of NATO members that ‘We have just concluded a meeting on strengthening NATO’s deterrence and defence’. He said that it is agreed on the next steps to modernise the NATO Command Structure, based on recommendations from our senior commanders. We also received an update on the deployment of our new deterrent forces in Estonia, Latvia, Lithuania and Poland, NATO Chief told the reporters in a press conference after the meeting.

He told that the troops have started to arrive and we expect the four multinational battle groups to be fully operational by June.

‘They are a clear demonstration of NATO’s transatlantic unity and resolve’, he said, ‘ its clear message sent to any potential aggressor.

‘Our deployments are defensive and measured. We will not match Russia soldier for soldier, tank for tank, or plane for plane. Our aim is to prevent conflict, not to provoke it.’

‘We also discussed our presence in the Black Sea region. Complementing our strengthened regional posture in the air and on land – based on a multinational framework brigade in Romania.’ Jens Stoltenberg told reporters.

‘Today, we agreed on two additional maritime measures: an increased NATO naval presence in the Black Sea for enhanced training, exercises and situational awareness, and a maritime coordination function for our Standing Naval Forces when operating with other Allied forces in the Black Sea region.’ ‘And this shows Allies stand together, united and strong’.

Stoltenberg said Cyber defence is another top priority for NATO. We have already strengthened the protection of our networks, established Cyber Rapid Reaction teams and are helping Allies to improve their own cyber defences. Today, we approved an updated Cyber Defence Plan, and a roadmap to implement cyberspace as an operational domain. This will increase our ability to work together, develop capabilities, and share information. Cyber defence is part of NATO’s response to hybrid warfare. Hybrid attacks can damage our economies, our transport and communications networks, and our energy security. And the measures we approved today will help make our societies more resilient and better prepared.’

‘Yesterday, we agreed to set up a new Hub for the South at our Joint Force Command in Naples. Helping us to boost our understanding of regional challenges. And work more closely with partners.’ He said.

NATO Secretary General said, ‘ One of those partners is Libya. Last night, I received a formal request from Libyan Prime Minister Fayez Al Sarraj. Requesting NATO’s advice and expertise in the field of defence and security institution building. At the Warsaw Summit, Allies agreed to provide Libya with support if requested by the Government of National Accord.’

‘This request has now been received and the North Atlantic Council will discuss how to take it forward as soon as possible,’ He told media.