Mueller is ‘Going to Crack Don Junior Like An Egg’ in Russia Probe’, Steve Bannon 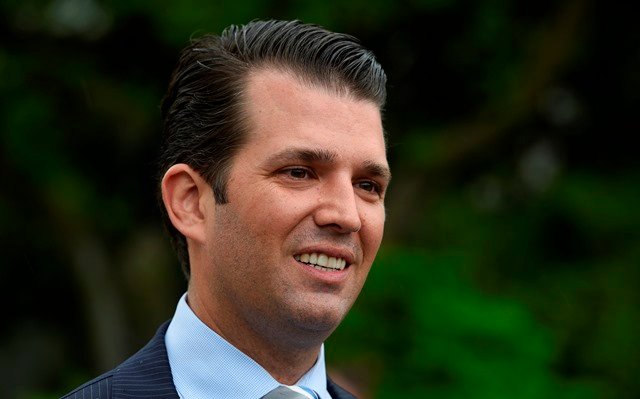 Former White House strategist Steve Bannon has described the Trump Tower meeting in 2016 between Donald Trump Jr.  and a group of Russians as “treasonous” and “unpatriotic,” according to an upcoming book.

The White House called it “trashy fiction” and President Trump said Mr. Bannon had “lost his mind.” Mr. Bannon tweeted that he was “taken out of context.”

The account is from the book “Fire and Fury: Inside the Trump White House” to be released next week. The Guardian and New York Magazine published excerpts Wednesday.

In a tweet Wednesday afternoon after a political firestorm erupted, Mr. Bannon said of a CNN report on the book, “This is total Fake News and taken out of context, don’t believe the liberal propaganda Machine! #MAGA.” It wasn’t clear if he was referring only to the “treasonous” comment or the entirety of his remarks.

Mr. Bannon  who was a top campaign aide to Mr. Trump is highly critical in the book about a June 2016 meeting involving Donald Trump Jr, presidential son-in-law Jared Kushner, then-campaign chairman Paul Manafort and Russian lawyer Natalia Veselnitskaya at Trump Tower in New York. A go-between had promised to deliver documents with dirt on Democratic rival Hillary Clinton, but didn’t produce such information at the meeting.

Shortly after the meeting, according to the book, Mr. Bannon mocked the Trump advisers who set it up.

“The three senior guys in the campaign thought it was a good idea to meet with a foreign government inside Trump Tower in the conference room on the 25th floor — with no lawyers. They didn’t have any lawyers,” Mr. Bannon said in the book. “Even if you thought that this was not treasonous, or unpatriotic, or bad sh—, and I happen to think it’s all of that, you should have called the FBI immediately.”

The author also writes that Mr. Bannon was “certain” that the younger Trump took the participants to see his father upstairs at Trump Tower after the meeting. The White House has said Mr. Trump only learned about his son’s meeting with the Russian lawyer about a year later.

Mr. Bannon was not challenging the accuracy of the book excerpts Wednesday.

The White House hit back hard against Mr. Bannon and the book.

“This book is filled with false and misleading accounts from individuals who have no access or influence with the White House,” said White House press secretary Sarah Huckabee Sanders. “Participating in a book that can only be described as trashy tabloid fiction exposes their sad desperate attempts at relevancy.”

A spokeswoman for first lady Melania Trump also rejected the book’s assertion that she didn’t want her husband to win the presidency.

“The book is clearly going to be sold in the bargain fiction section. Mrs. Trump supported her husband’s decision to run for president and in fact, encouraged him to do so,” said her spokeswoman, Stephanie Grisham. “She was confident he would win and was very happy when he did.”

Conservative web site icon Matt Drudge commented on Twitter Wednesday, “No wonder schizophrenic Steve Bannon has been walking around with a small army of bodyguards…”

Mr. Wolff writes that Mr. Bannon believed if any such meeting had to take place during the campaign, it should have been set up “in a Holiday Inn in Manchester, New Hampshire, with your lawyers who meet with these people,” the Guardian said. He said the information could have been given to Breitbart, the conservative news organization he leads, “or maybe some other more legitimate publication.”

“You never see it, you never know it, because you don’t need to. … But that’s the brain trust that they had,” he said, according to the book.

Noting the outpouring of reaction to the story on Breitbart’s web site, Donald Trump Jr. commented on Twitter, “Wow, Just looked at the comments section on Breitbart. Wow. When Bannon has lost Breitbart, he’s left with … umm, nothing.”

Mr. Trump predicted last week in an interview that Mr. Mueller was “going to be fair” with his probe, although he also said the investigation “makes the country look very bad.” The president has insisted repeatedly there was “no collusion” between his campaign and Russia.

In the book, Mr. Bannon indicates that the White House is misguided in its hope that the special counsel’s probe will end soon.

“You realize where this is going,” he is quoted as saying. “This is all about money laundering. Mueller chose [senior prosecutor Andrew] Weissmann first and he is a money-laundering guy. Their path to f–ing Trump goes right through Paul Manafort, Don Jr and Jared Kusher . … It’s as plain as a hair on your face.”

In a reference to the German financial institution that has lent hundreds of millions of dollars to Mr. Kushner’s family real estate business, Mr. Bannon said in the book: “It goes through Deutsche Bank and all the Kushner sh—. The Kushner sh— is greasy. They’re going to go right through that. They’re going to roll those two guys up and say play me or trade me.”

The president’s former aide used a hurricane metaphor to describe the White House ’s casual approach to the Mueller investigation: “They’re sitting on a beach trying to stop a Category Five.”