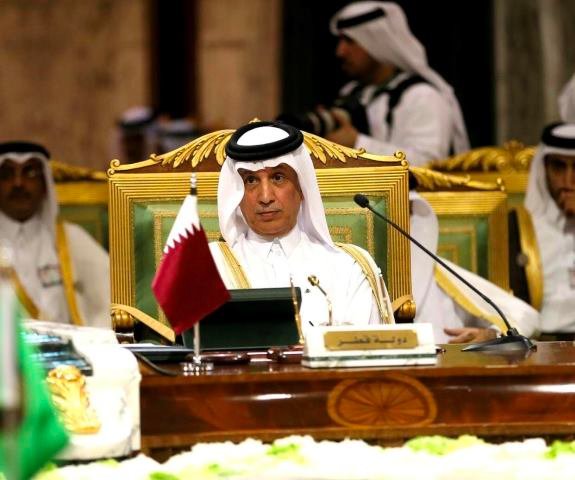 The State of Qatar participated in the 39th Summit of the Supreme Council of the Gulf Cooperation Council (GCC), hosted by the Kingdom of Saudi Arabia in Riyadh.

Minister of State for Foreign Affairs was accompanied by an official delegation.

Gulf leaders and officials met in Riyadh for the Gulf Cooperation Council (GCC) summit on Sunday as a diplomatic crisis continues to grip the Gulf region.

The 39th GCC summit comes amid an ongoing blockade on Qatar imposed in June 2017, by Saudi Arabia, Bahrain, the United Arab Emirates (UAE) and Egypt..

The quartet has accused Qatar of supporting “terrorism”. Qatar has denied the charges and said the boycott aims to impinge on its sovereignty.

Qatar’s Emir Sheikh Tamim bin Hamad Al Thani was not in attendance. Instead, a delegation headed by Qatar’s Minister of State for Foreign Affairs Sultan bin Saad Al Muraikhi was sent to represent the country at the gathering.

“Qatar’s emir should have accepted the fair demands of the boycotting states] and attended the summit,” Al Khalifa said in a Twitter post on Sunday.

Doha brushed aside the comments.

“Qatar can make its own decisions and had attended [last year’s] Kuwait summit while the leaders of the boycotting countries did not,” said Ahmed bin Saeed Al Rumaihi, director of the information office at Qatar’s foreign ministry.

Analysts say it remains unclear how the summit will affect the ongoing dispute, as the “largely symbolic” body has for years abandoned its functional role of building closer ties between member states.

“Since the first [GCC] crisis in 2014, the council demonstrated its inability to mediate nor to have a significant role in easing tensions between … member states,” Luciano Zaccara, a Gulf politics researcher at Qatar University, told Al Jazeera.

The GCC, a political and economic alliance of countries in the Arabian Peninsula, was established in 1981 to foster socioeconomic, security, and cultural cooperation.

But according to Mahjoob Zweiri, director of the Gulf Studies Center at Qatar University, the “tradition” has become a tool for Saudi Arabia to maintain its role as a regional power.

“Without the council, Saudi Arabia has no power in the region,” Zweiri told Al Jazeera. “It puts Saudi Arabia in the leadership position both economically and more so politically. That’s why they insist on maintaining the GCC council,” Zweiri said.

Given last December’s summit in Kuwait was cut short, many questioned whether this year’s gathering would take place altogether. At the time, the UAE announced it had formed a economic and military partnership with Saudi Arabia separate from the GCC.

But this year’s meeting also comes amid pressure from the West, Zweiri noted. The United States – a GCC ally – and Europe view the council as vital for keeping the region secure from Saudi’s regional rival, Iran.

Last year’s summit was attended by Sheikh Tamim, who is not participating this year, despite Riyadh’s invitation.

The address was the first official letter extended from the Saudi king to Sheikh Tamim since the beginning of the GCC rift, but Zweiri described the move as a mere formality, rather than an indication of the kingdom’s willingness to resolve the crisis.

“It is a tradition that the host country has to invite all of the council’s members – it’s merely a formality,” he said.

While the agenda of this year’s summit has not been made public, experts predict the Gulf crisis will not be a top priority.

They agreed the summit and Riyadh’s invitation to Qatar will subtly portray to the world that “the ball is now in Qatar’s court” – but it will likely not actively address the dispute.

This is why Qatar, which has no interest in presenting itself as being distant from the council, is sending a “lower delegation”, Zweiri said.

According to Zaccara, if the invitation was completely rejected, the blockading countries may have accused Qatar of lacking the will to “sit down and talk”.

“This [sending state ministers] will demonstrate that the Qatari government was never reluctant to engage in a direct dialogue,” he said.

Similarly, Jocelyn Sage Mitchell, assistant professor at Northwestern University in Qatar, said Doha’s participation in the summit allowed the country to “maintain the high road” in the current diplomatic crisis.

It also offered Doha an opportunity to refute allegations it is insufficiently supportive of its fellow Gulf monarchies, Mitchell said.

Earlier this month, Sheikh Tamim said he regretted the continuation of conflict with other Arab states, but said that the “crisis will pass”.

Apart from formalities, the GCC council maintains value as a “forum for economic coordination”, despite the body’s lack of political power, according to Mitchell.

“Both Saudi Arabia and Qatar gain something from continuing to participate in this organisation,” she told Al Jazeera, referencing the GCC-wide value-added tax (VAT) project that was intended to assist Gulf states with budget deficits and to serve as a way to increase non-oil revenues.

“Saudi Arabia would like to see Qatar commit to implementing the VAT in 2019 as this would provide some political cover for Saudi Arabia’s financial need for this tax,” Mitchell explained.

This year’s summit also comes amid the diplomatic crisis over Saudi journalist Jamal Khashoggi’s assassination, which has put Riyadh in the dock.

Khashoggi, a Washington Post columnist who lived in self-imposed exile in the US, was killed inside the kingdom’s consulate in Istanbul in early October.

As Saudi Arabia’s de facto leader, MBS, in particular, has come under scrutiny over the country’s involvement in the war in Yemen, which has caused thousands of civilian deaths, as well as its intensifying crackdown on public dissent in Saudi Arabia.

According to Zweiri, Riyadh may use the meeting as a platform to present itself as a victim of international pressure.

“There will be a repetition of events with no substance, with nothing new,” Zweiri said of the summit. “But it [Saudi Arabia] may try to present itself as a victim … of everything, including the Khashoggi murder.”

With the GCC unable to resolve the crisis, analysts say the organisation itself has proven to be futile, both politically and, to an extent, economically.

Experts Al Jazeera spoke to agree that Saudi Arabia is not interested in starting a process towards a negotiated solution for the current spat, but insist it is in both Riyadh and Qatar’s best interest to remain in the council for now.

Since the crisis began, Qatar has secured new strategic alliances, most notably with Turkey.

Sheikh Tamim said on Tuesday that the nation had grown its exports by 18 percent and slashed spending by 20 percent over the past year.

Addressing Qatar’s Shura Council, he added his country would continue to develop its oil and gas industries as it is eager to preserve its status as the top liquefied natural gas exporter in the world.

Doha, 24 Sept. 2022 (QE) QatarEnergy announced that it has selected ...
END_OF_DOCUMENT_TOKEN_TO_BE_REPLACED