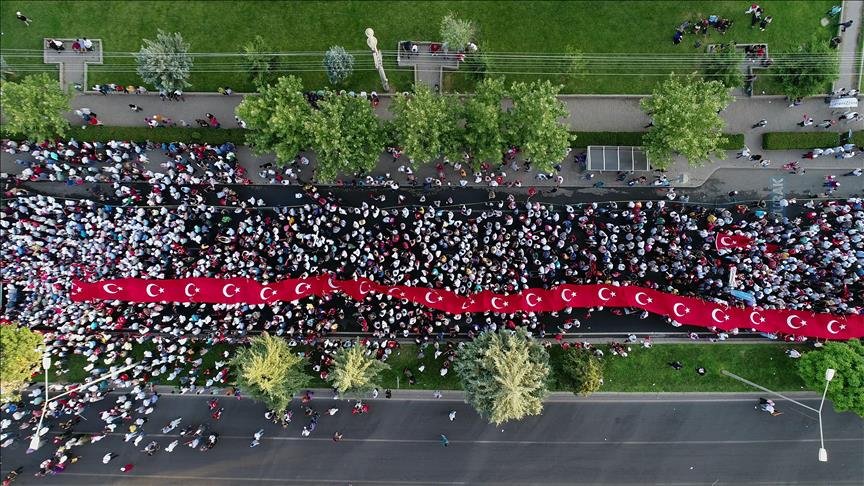 Turkish citizens Saturday poured into streets for national unity marches across the country on the first anniversary of defeated coup, which left 250 people martyred and nearly 2,200 injured.

In eastern Agri province, people gathered in the Abide Square chanting “shoulder to shoulder against tyrants”.

In Uzumlu district of northeastern Erzincan province, a wrestling tournament was held with the participation of 90 athletes.

In eastern Igdir province, a 30-meter Turkish flag was waived during a commemorating march.

Another giant Turkish flag was raised in eastern Malatya province. Two flags of 425 square meters each were hanged at a canyon in the city.

In western Izmir province, a public race was organized. People aged between nine to 60 years ran on 2,000 meters racing track.

Almost 90,000 salah were recited in the memory of July 15 martyrs throughout the country.

Traditionally, sala prayers are read to announce a funeral at the mosque.

People gathered in the city centers and held marches in all cities of Turkey including Van, Sinop, Tokat, Kastamonu and Amasya chanting slogans against the Fetullah Terrorist Organization (FETO).

The FETO and its U.S.-based leader Fetullah Gulen orchestrated the defeated coup of July 15, 2016, which left 250 people martyred and nearly 2,200 injured.

Ankara also accuses FETO of being behind a long-running campaign to overthrow the state through the infiltration of Turkish institutions, particularly the military, police and judiciary.