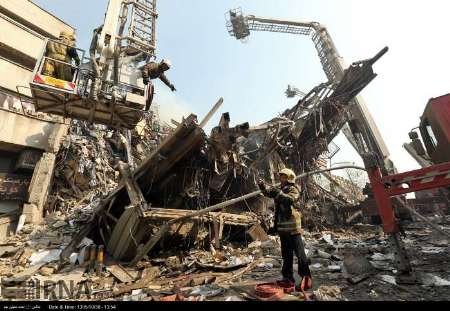 Head of Iran’s Emergency Medical Services Pir-Hossein Kolivand said on Thursday that following the collapse of the Plasco Trade Center many firefighters are feared dead.

Kolivand said there is no exact report on the number of the firemen originally involved in putting out the fire started earlier today in the business building causing its final collapse.

Over 200 people injured during the fire have been transferred to health centers and all hospitals in Tehran are reportedly on alert.

The official also said he has asked for the air rescue to help transfer of the wounded to the hospitals more easily.

The area in Jomhoori Avenue in central Tehran has been cordoned off by the Police to stop the people who have crowded the surrounding neighborhoods.

It is said that, as a safety measure, staff members of two embassies in the vicinity of the Plasco Trade Center and also residents of many surrounding buildings have been asked by the authorities to evacuate.

The fire in Plasco Trade Center which is one of the biggest in the Iranian capital collapsed this morning as the fire started in the seventeen-storey business building in the early hours today, despite efforts by Tehran firefighters to stop it.

A center for making apparel, the Plasco center soon was engulfed in a big fire that caused the collapse of a wall in the building’s northern side and its final total collapse.

The business building was built in the early 1960s and it was the tallest building in the city at the time of its construction.

A large number of businesses in the building are believed to be involved in the textile and garment industries.

Doha, 25 June 2022 THE Embassy of Nepal and the Non-Resident ...
END_OF_DOCUMENT_TOKEN_TO_BE_REPLACED