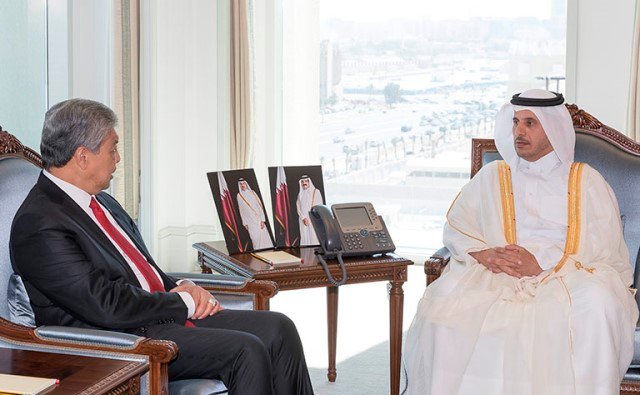 He said the visit was expected to regalvanise economic and investment cooperation between both countries besides taking the existing good ties among their top leaders a new level.

“The Deputy Prime Minister’s visit will surely be able to open the doors of economic opportunities for Malaysian companies and provide employment for Malaysians besides raising the existing investment cooperation negotiations to a higher level,” he told the Malaysian media here today.

This is Ahmad Zahid’s first visit to Qatar since being appointed Deputy Prime Minister in 2015.

The visit by Ahmad Zahid, who is also Home Minister, is at the invitation of Qatar’s Prime Minister and Interior Minister Sheikh Abdullah bin Nasser bin Khalifa Al Thani.

The Deputy Prime Minister and wife Datin Seri Hamidah Khamis and his delegation are scheduled to arrive here at 11pm local time (Malaysian time 4am Sunday).

Ahmad Jazri said that tomorrow, Ahmad Zahid is scheduled to have an audience with the Emir of Qatar Sheikh Tamim Hamad Al-Thani followed by courtesy call on Sheikh Abdullah.

Ahmad Zahid will also be visiting the Emirate’s National Control Centre and a community project planned for the city of Lusail, the the Hamad Internatioal Airport apart from meeting the Malaysian diaspora in Qatar.

The last visit by a top Malaysian leader to Qatar was made by Prime Minister Datuk Seri Najib Tun Razak in December 2011.

Currently, 5,000 Malaysians are residing in Qatar, mostly working with Qatar Airways and in the education and oil and gas sectors.