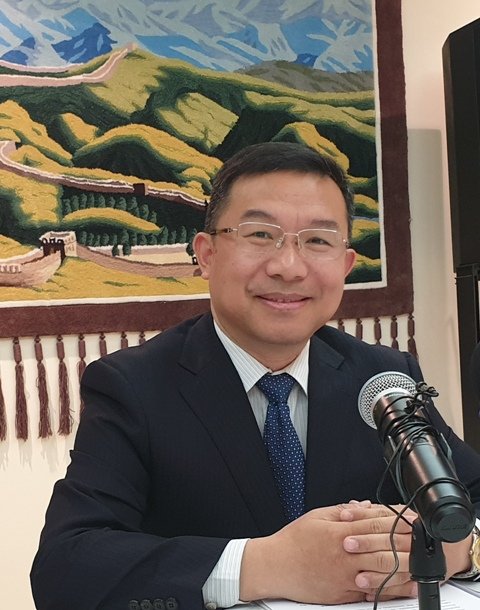 China’s Position On The Latest Legislative Decision Of National Security In Hong Kong, HE ZHOU JIAN

The legislation for safeguarding national security in Hong Kong is China’s internal affair, and no foreign country has the right to interfere. The Chinese government is determined to safeguard the nation’s security to implement ‘one country, two systems’

PRACTICES at home and abroad have shown that national security is the very foundation for a country to survive and thrive; without it, peace, stability development  and prosperity would be impossible. No country, including China and Qatar, will ever turn a blind eye to illegal acts that jeopardise national security. At present, Hong Kong is facing unprecedented risks and challenges in safeguarding national security. During the turmoil last year, radical
separatists advocating “Hong Kong independence” ramped up with escalating violence and even terrorist acts, some external forces also came in meddling with Hong Kong affairs.

Hong Kong, known as the “pearl of orient”, became a frontier of instigation, secession, subversion and infiltration. The metropolis has turned from one of the safest cities in the world to a battlefield of violence. All these have jeopardised national security in Hong Kong, posing a huge threat to its long-term prosperity and the implementation of “one country, two systems” principle.

In regards to some reservations from some Western politicians on claiming that the legislation has ‘bypassed the legislative process of Hong Kong’ and ‘unilaterally and arbitrarily imposes the national security legislation on Hong Kong’, Such critics need to understand that the Central Government is responsible for upholding national security in China, as is the case in every country. The Central Government holds the primary and ultimate responsibility for national security in all local administrative regions. This is the basic principle of national sovereignty, and a common practice in all countries around the world. The
NPC’s decision has very legal principles to follow. First, Hong Kong is a special administrative region of China. As Article 31 of China’s Constitution stipulates, “The state may establish special administrative regions when necessary.

The systems to be instituted in special administrative regions shall be prescribed by law enacted by the National People’s Congress in the light of specific  conditions.” Therefore the NPC has the supreme power and the obligation to fulfill its constitutional duty to safeguard national security in accordance with the  Constitution and the Basic Law, and take necessary legislative actions in line with the needs in the HKSAR, including enacting legislation concerning national security in the SAR, and establishing relevant legal system and enforcement mechanisms. Therefore, the NPC’s decision has solid legal footing and supreme legal authority.

Then there are some people who worry that the Chinese Central government will gradually tighten its grip on Hong Kong, changing the ‘One Country, Two  Systems’ and the autonomy, democracy and freedom of Hong Kong. To such critics, my reply would be that the original mission of “one country, two systems” is to uphold national sovereignty, solidarity and territorial integrity, and to maintain long-term prosperity and stability in Hong Kong. “One country” is the prerequisite for and foundation of “two systems”, while “two systems” are subordinate to and derived from “one country”. Should the “cone country” principle be undermined, “two Systems” would be impossible. Who is undermining “one country, two systems”? It is those who undermined the territorial integrity and  advocates separatism and terrorism, and those who blatantly meddled in Hong Kong affairs. The NPC’s legislative decision targets precisely acts of secession, subversion, terrorism and external interference, which would be a small minority of criminals jeopardising national security, while protecting the overwhelming
majority of law-abiding Hong Kong residents. Only when national security is safeguarded can “one country, two systems” be fully, faithfully and smoothly  mplemented, then Hong Kong residents could really gain a sense of security, certainty and happiness. Every country in the world has its own national security legislation. How could such legislation harm democracy and freedom? On the contrary, China’s decision on the legislation will not affect the basic rights enjoyed  by Hong Kong residents, but will provide a safer environment to better protect their rights and the freedom of speech, news, demonstration, etc.

The Chinese government is firmly committed to implement the “one country, two systems”, which is guided by two principles: the first is to ensure that “one  country, two systems” will stay unchanged and be upheld unswerving; second is to ensure that the policy is applied without being bent or distorted. The legislation will not change the existing capitalist system in Hong Kong, or its high degree of autonomy and the independence of legal system. The rights and  freedoms of Hong Kong residents, as well as the judicial power and final jurisdiction of the SAR will not be altered. The international community has the very reason to stay assured of the legislation. National security and stability of Hong Kong are the common aspirations of the vast majority of residents. After the decision of the legislation was approved, the SAR government, the Legislative Council and its members, as well as representatives of all walks of life have all  voiced their endorsement. Many people also expressed their support online. This fully demonstrated that it is the majority of public opinion towards stability,  development, and the rule of law in Hong Kong. The legislation, which is passed by an overwhelming majority in the NPC, fully reflects people’s will and the
mainstream trend.

In regards to fear shown from some quarters as National Security Legislation may damage Hong Kong’s status as a global financial centre, which will affect  investor’s confidence in Hong Kong, I will say that in recent years, Hong Kong, the ‘Pearl of orient’, has become a popular destination for investment and tourism  for Qataris. There are two flights per day between Doha and Hong Kong, carrying Qatari friends for business, tour and shopping, enjoying the prosperity, stability and charm of this international metropolis. Qatar has a consulate in Hong Kong, and maintains close economic, trade, and investment cooperation with the SAR.

We are pleased to see that in 2019, the QFC has signed a MoU of investment cooperation with the Hong Kong Investment Promotion Agency and the Hong Kong Chamber of Commerce. Qatar National Bank opened its first branch in Hong Kong, and Qatar Airways also purchased large shares of Cathy Pacific. All this shows Qatar’s deepening interests in the Hong Kong SAR.

Regrettably, since the turmoil last year, “Hong Kong independence” and local radical separatists colluded with foreign forces, and ramped up violent activities,  advocating independence and paralysing the government. This not only severely damages national security, but has also thrown Hong Kong into the most dangerous situation since its return to mainland in 1997. International rating agencies have repeatedly downgraded Hong Kong’s credit rating. Hong Kong has  lost its position as the world’s freest economy after 25 years, and its GDP has seen reduction for the first time over a decade. Their business was affected, people’s  lives were affected, and all its trading partners were affected. Qatari friends have also faced with hurdles when travelling and doing business in Hong Kong.

The national security legislation precisely targets the deadly loopholes in Hong Kong’s national security. Its aim is to eradicate the ground of radical separatists,  put the long lasting disorder and violent into a halt, and provide a more peaceful and stable society, a more perfected legal system, and a more predictable  business environment.  Only in this way can we consolidate Hong Kong’s position as an international financial, trade and shipping centre, and the legitimate  rights and interests of foreign investors and travelers can really be guaranteed. Throughout the history of China and Qatar, our two countries both uphold a consistent position in regards to national sovereignty and security, and are determined in opposing any external interference. This is our common traditions, so  we believe that our Qatari friends can understand, respect and support China’s position and efforts in maintaining national security through this legislation. We
also hope that our friends in Qatar will have more confidence in Hong Kong’s future. We welcome you to go to Hong Kong for business, investment and tourism,  o that the ‘Pearl of the Orient’ and Qatar as ‘Pearl of the Gulf’ will shine together and benefit both peoples. Hong Kong is a special administrative region of China.  It is a common practice for the Central Government to implement national security legislation and enforcement mechanisms in any local administrative region.

No country would ever allow activities within its own  territory that advocate separatism and undermines national security. The United States has dozens of national security legislation and regulations, building up an unbreakable wall of national security, but insisted on breaking holes on China’s wall and efforts to secure its own country.

This shows nothing but the double standards and political suppression of the. We would like to tell the US, that the legislation for safeguarding national security  in Hong Kong is purely China’s internal affair, and no foreign country has the right to interfere. The Chinese government is firm in its determination to safeguard China’s sovereignty, security and development interests, to implement the principle of “one country, two systems” and to oppose any external interference in  Hong Kong affairs. If someone is bent on harming China’s interests, China will take all necessary measures to hit back.