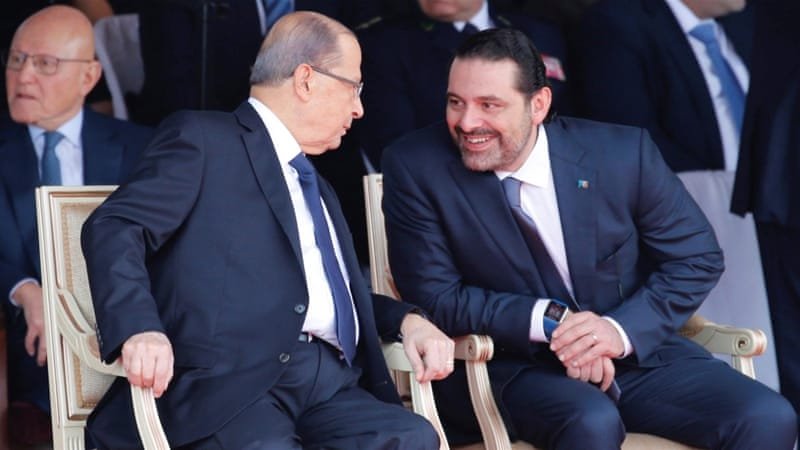 Saad Harriri has deferred his resignation as Lebanon’s Prime Minister and has vowed to work with the country’s President, Michel Aoun, to “protect” the country and maintain its security.

“Today, I presented my resignation to the president and he urged me to hold onto it for more dialogue about its reasons and its political underpinnings … and I accepted,” he said during a televised speech at the country’s presidential palace on Wednesday.

“I will do so in hopes that it will renew talks to strengthen our unity and resolve internal conflicts we have and how they reflect in our relations with our Arab brothers,” Hariri added.

“At this time, Lebanon needs exceptional efforts from everyone in the face of upcoming challenges … I look forward today to a real partnership with all of the political parties to put Lebanon’s interest on top of anything else.”

Hariri addressed the nation after holding a private meeting with Aoun in the capital, Beirut.

Hariri’s return to Lebanon comes two weeks after he announced his shock resignation as the country’s prime minister in a televised speech from Saudi Arabia.

In his resignation speech, Hariri blamed Iran’s “meddling” in the country and its Lebanese ally,  the Hezbollah movement for his decision, adding that he feared an assassination attempt.

The sudden move plunged Lebanon – a country with fragile political stability – into an ongoing period of uncertainty,  raising fears of a potential war between Saudi Arabia and Iran with Lebanon on the front lines.

Officials in Lebanon had alleged that Hariri was being held hostage by Saudi authorities, an allegation Hariri denied in his first public statement following his resignation speech. The Sunni Muslim politician and Saudi ally has been promising to return home since.

Lebanese officials previously said they would only accept his resignation if it was delivered on Lebanese soil.

In a televised speech, Hezbollah leader Hassan Nasrallah accused Saudi Arabia of forcing Hariri to quit and holding him against his will. The Lebanese unity government that Hariri formed a year ago includes Hezbollah members.

Al Jazeera’s Zein Khodr, reporting from Beirut, said that Hariri’s tone has shifted since he gave his resignation speech two weeks ago.

“What is clear is that there has been intensive discussions behind closed doors,” she said.

“The resignation was an attempt by Saudi Arabia to curb Hezbollah’s influence …That attempt backfired … Hariri was conciliatory in his message.”

On Saturday, Hariri made his way to Paris to meet French President Emmanuel Macron. There, he announced that he would be partaking in Lebanon’s Independence Day celebrations.