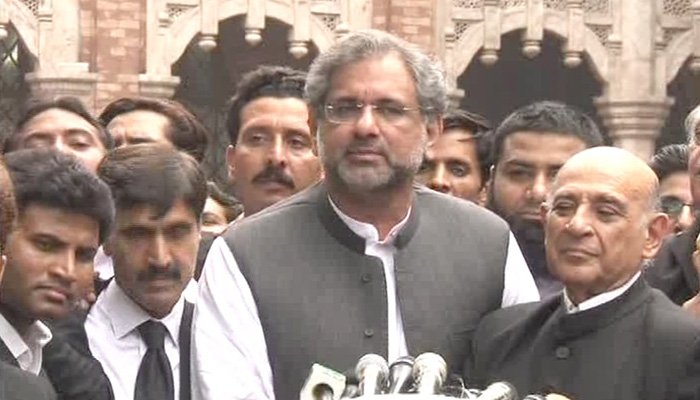 The Lahore High Court (LHC) on Thursday dismissed the decision of an appellate tribunal to disqualify for life former premier Shahid Khaqani Abbasi and bar him from contesting polls from NA-57 Murree.

An election tribunal had found the former premier guilty of concealment of facts, after it accepted objections raised by petitioner Masood Ahmed Abbasi against the PML-N leader’s papers, including that of tampering with his nomination papers for his home constituency, NA-57. Abbasi was then disqualified from contesting the upcoming polls.

The LHC had later overruled the appellate tribunal’s decision, allowing  Abbasi to contest General Election 2018 from his home constituency of NA-57, Murree on an interim basis.

Hearing the case on Wednesday, the court had inquired why Abbasi was making anti-judiciary speeches. “The court is not siding with anyone,” an LHC judge observed. “When Supreme Court announced its verdict [to disqualify] Nawaz Sharif [from holding office], you said he was your prime minister. You are trying to destroy the system.”

The high court had summoned today the returning officer (RO) of NA-57 for the hearing of Abbasi’s petition against the tribunal’s verdict. The officer had accepted the former premier’s nomination papers.

The petitioner had contended that Abbasi had first attached a Rs100 stamp paper with his papers and added a Rs500 stamp paper later on. He had also accused Abbasi of illegally occupying the Lawrence College forest and understating the ownership of his house in F-7/2.

The constituency’s returning officer (RO), who had originally accepted Abbasi’s papers, was suspended after he admitted his error.

In his written order on rejection of Abbasi’s candidature, Judge Ibadur Rehman Lodhi said that the former premier was “guilty of concealment of facts and withholding of the complete information from his voters”. He also went on to declare that Abbasi was not qualified to be elected a member of parliament according to Article 62(1)(f) of the constitution.

Elaborating on the decision, the judge stated that Abbasi had declared the value of his house in Islamabad to be Rs300,000 but put it under mortgage against an amount of Rs24.7 million.

He also noted the discrepancies in two affidavits submitted by Abbasi as one had mentioned shares in Air Blue and Blue Pines Inn Murree, “after interpolation”, while the other did not.

Judge Rahman stated that the stance of the returning officer (RO) — who an inquiry has been initiated against — was different from that of Abbasi’s lawyer on the changes made to the affidavit.