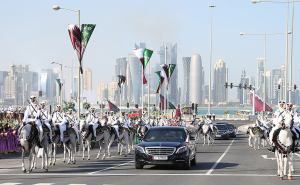 Official statement issued on the occasion reported by Qatar News Agency. Emir of Qatar says ‘I would like to extend on behalf of the people of the State of Qatar and on my own behalf our sincere welcome and express our great pleasure over the visit of my brother the Custodian of the Two Holy Mosques King Salman bin Abdulaziz Al Saud of Saudi Arabia, for whom we have deep affection, dearness and all the appreciation; and we share with his kind people the most deeply-rooted, strongest and well established fraternal ties. Welcome to him in his second country Qatar among his family and relatives.’

‘I may not need to stress in this context our intense pride over the strong friendly and historic relations between Qatar and the brotherly Kingdom of Saudi Arabia laid by parents and grandparents, which are very keen to continue boosting, enhancing and developing them for the benefit of our two peoples.’