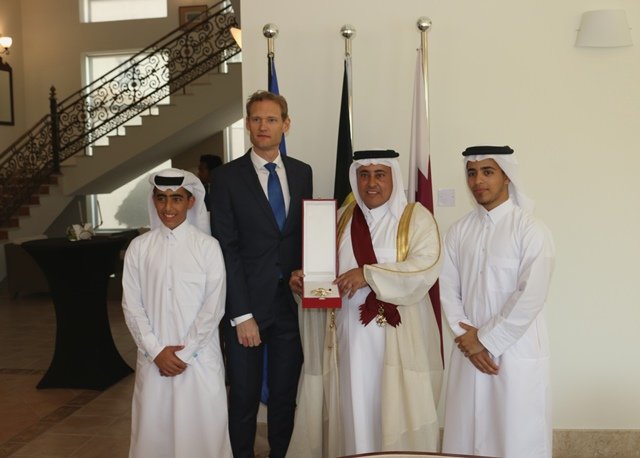 King Philippe of Kingdom of Belgium has awarded country’s top civil award ‘Order of the Crown in the class of Grand Cross’ to ambassador Sheikh Ali bin Jassim Al-Thani, Former Qatar’s ambassador to Belgium between 2012 to 2017.

On behalf of the King of Belgium, Christphe Payot, ambassador of Belgium to State of Qatar honored Sheikh Ali bin Jassim Al-Thani with the Order of the Crown in the class of Grand Cross during a ceremony held at his official residence in Doha.

Ambassador Christophe said the award is in recognition of his efforts to consolidate bilateral ties during his five-year of posting in the Kingdom of Belgium.

Ambassador Sheikh Ali bin Jabbor AlThani talking exclusively with www.asiantelegraphqatar.com said on the occasion ‘I am really honored today receiving such prestigious award from King of Belgium. I am very glad to serve my country during my posting to Belgium as my country’s ambassador.