‘Kashmir An Un-Finished Agenda Of Sub-Continent Partition’, President of Pakistan 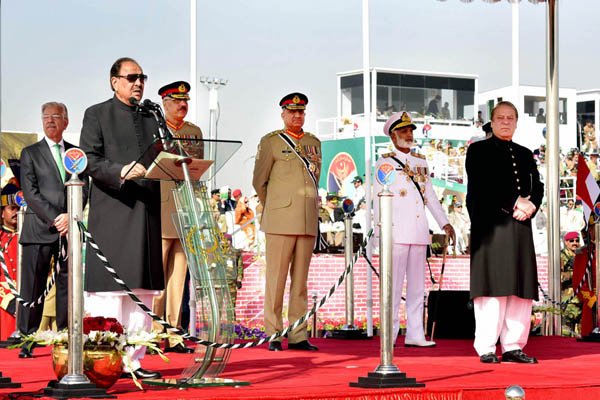 President Mamnoon Hussain Thursday terming Pakistan’s defence as “impregnable” said the country’s conventional and nuclear capabilities were meant to ensure global and regional peace. Addressing at the Pakistan Day parade here at the Shakarparian Parade Ground, the President said the country’s defence was strong and expressed resolve to make every effort for the progress, prosperity and solidarity of the homeland.

The highlight of the parade was the first-time participation of the tri-services contingents of China’s People Liberation Army, Saudi Arabia’s Special Forces and Turkey’s Mehtar Band in the parade along with Pakistani troops.

President Mamnoon said Pakistan wanted peaceful and friendly relations with its neighbours, however regretted that the irresponsible attitude of India and its continuous violation at Line of Control and Working Boundary had put the region’s peace at risk.

“Pakistan is ready to hold negotiations with India and also wants to resolve the issue of Kashmir in accordance with the resolutions of United Nations,” he stressed.

He termed Kashmir an “unfinished agenda of the sub-continent’s partition,” and said Pakistan would continue to extend moral, political and diplomatic support to its Kashmiri brethren.

He urged upon the international community to fulfil its obligation in this regard so as to realize the dream of regional stability and sustainable peace.

The President felicitated the audience on Pakistan Day and said the occasion narrated an account of determination and faith which gave strength to the Muslims of sub-continent to change the history and geography of the world under the prudent leadership of Quaid-e-Azam Muhammad Ali Jinnah.

“On this day, a direction-less nation discovered its ideological identity and left a lasting imprint on global scenario with the creation of Pakistan,” he said.

The President paid tributes to those who sacrificed their lives for Pakistan and its stability and said their footsteps would be followed to uphold the country’s sovereignty.

President Mamnoon mentioned that Pakistan was fighting the menace of terrorism for the last several years and lauded the courageous services of the country’s armed forces and law enforcement agencies.

“It is the sacrifices of our Shaheeds and Ghazis that has made Pakistan stronger than before,” he said.

The President categorically said that Operation Radd-ul-Fasaad launched after the Operation Zarb-e-Azb, would continue till complete elimination of terrorists.

He expressed satisfaction that the resolve of Pakistani nation and its support to the country’s armed forces and law enforcement agencies to end terrorism at country’s soil had disrupted the very foundation of extremist narrative.

President Mamnoon said Pakistan’s economy had gained stability and the country was emerging as a strong economic power of the region.

He lauded the support of friendly and brotherly countries in Pakistan’s journey of progress and development, and particularly mentioned the sincere role of China.

He said the mega project of China Pakistan Economic Corridor (CPEC) had opened new vistas of prosperity for the entire region.

The President expressed pleasure that a contingent of China’s People Liberation Army was participating in the Pakistan Day parade, which he said was unprecedented in the history of Chinese military to join such parade in a foreign country.

He also mentioned the military contingents of Saudi Arabia and South Africa present on the occasion and said the beautiful tunes of Turkish military band had made the event memorable.

The President expressed gratitude to the guest countries for their participation and said Pakistan would always be there to extend its support to achieve the common goals of peace, progress and prosperity.

He appreciated the Parade Commander, parade participants, local administration and Capital Development Authority for holding the event in a superb manner.

“The faces of my brave soldiers in this Parade Ground glowing with valour and courage, and the shine of their armaments, is a depiction of their steadfastness and determination,” he said.

He said the nation was proud of its officers and jawans and commended their discipline, highest degree of military standard and preparedness of modern warfare. “My valiant soldiers, continue serving this homeland with the same passion and keep high the Green Flag of a strong and democratic Pakistan. My prayers are with you,” the President told the contingents belonging to different regiments of armed forces.

The Parade venue was adorned with huge murals of Quaid-e-Azam and other national heroes. The event demonstrated a military display of high-grade weaponry, tanks and armoured vehicles. Various floats depicting the cultural diversity of the country were also showcased.