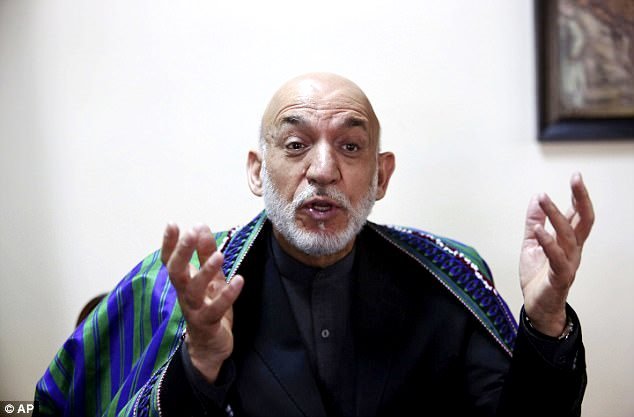 Former Afghan President Hamid Karzai has accused the US of using his country as a weapons testing ground following Washington’s Mother of All Bombs strike.

The US dropped its largest ever non-nuclear bomb on ISIS hideouts in Afghanistan’s Nangarhar province last week killing nearly 100 militants.

The 59-year-old said today that he objected to the use of the weapon, saying that his country ‘was used very disrespectfully by the U.S. to test its weapons of mass destruction.’

Just days ago, he accused his successor Ashraf Ghani of committing treason by allowing the US military to use the missile in the attack on ISIS.

Karzai condemned the attack and vowed to ‘stand against America’ in what may signal a broader political backlash that may endanger the US military mission in Afghanistan.

Karzai in his recent Tweet has said ‘I vehemently and in strongest words condemn the dropping of the latest weapon.’

He added: ‘This is not the war on terror but the inhuman and most brutal misuse of our country as testing ground for new and dangerous weapons. ‘It is upon us, Afghans, to stop the US.’

During a public event in Kabul, Karzai further undermined Ghani by asking: ‘How could you permit Americans to bomb your country with a device equal to an atom bomb?’

‘If the government has permitted them to do this, that was wrong and it has committed a national treason.’

While the bomb has been described as one of the largest non-nuclear devices ever used, its destructive power, equivalent to 11 tonnes of TNT, pales in comparison with the relatively small atomic bombs dropped on Japan in 1945, which had blasts equivalent to between 15,000 and 20,000 tonnes of TNT.